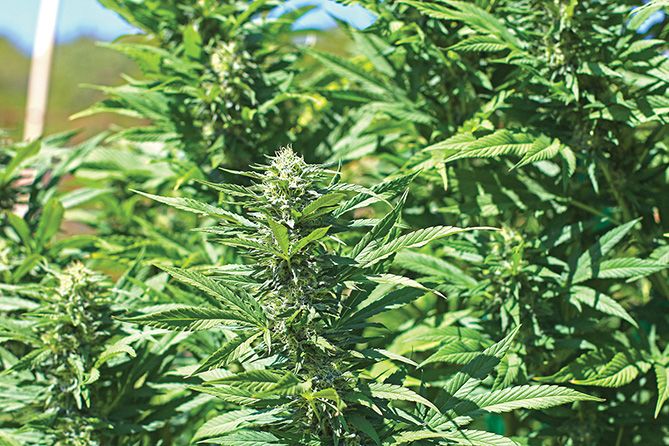 How to use compost, fertilizers and teas to grow healthier plants and increase yields and terpenes

Cannabis growers aiming to graduate beyond premixed fertilizers and bagged dirt are increasingly seeking out an alternative way to grow healthier plants and save money: living soil.

Living soil is often thought of as planting material that centers on compost and has an active microbiology and biodiversity, which can include worms and their castings, protozoa, healthy bacteria, amoebas, kelp extracts and even glacial rock dust.

Growers who create a biodiverse growing media skip the need for fertilizers because microbes eat and digest compounds that create bioavailable fertilizers. Plus, they report getting larger yields and better terpenes as a result.

Creating your own living soil can eliminate the need for costly bottled nutrients and, some growers argue, lead to plants so healthy that pesticides are also unnecessary because robust cannabis plants can naturally fend for themselves.

“If you’re trying to build a business, and you’re trying to build something that’s going to last and be profitable, living soil is by far the most cost-effective way to be around in 20 years,” said Dave Perkins, lead cultivator for The Emerald Cup, a company in Santa Rosa, California, that’s best known for its namesake cannabis competition but also is a vertically integrated marijuana firm.

Perkins ran the numbers for a 10,000-square-foot grow, and he estimates it would cost about $120,000 to fertilize for a year with liquid nutrients—compared with about $20,000 with living (or amended) soil.

“The yields are comparable, and the quality and longevity of the soil is way better,” he added.

After he lets the compost cure over the winter, Cornell applies it directly to his cultivation beds. He pays about $40-$45 per yard for that material.

When Cornell first started growing cannabis over a decade ago, he was a sharecropper who used bottled nutrients.

“I would say my production costs are probably a quarter (of the bottled nutrient cost) these days,” he said.

A Recipe for Success

At Solstice Cannabis in Seattle, co-founder Alex Cooley runs an indoor operation that uses hydroponics. And while he doesn’t run a strictly living soil system, he uses some similar techniques and ingredients.

“By blending your own fertilizers and building your own teas, it’s one of the most cost-effective ways you can hydroponically grow cannabis,” Cooley said.

He likes to include water-soluble microorganisms such as bacillus subtilis in his grow medium, and he creates compost teas that foster bacteria and fungi.

“We are using bits and pieces of it to create a biodynamic exchange,” Cooley said.

He administers beneficial bacteria, fungi and protozoa about six times throughout the life cycle of the plant. With Cooley’s hydroponic system, he needs to reapply the microbes because there is no growing media for them to inhabit.

At The Emerald Cup, Perkins ensures his compost includes both worms and worm castings. Using live worms is a good way to save a little money rather than just buying castings, he said.

He has his soil tested regularly and amends it accordingly. For example, if the test reveals the soil is deficient in phosphorous, he will add fish or blood meal to get the level back up.

Cornell is a strong proponent of using manure from dairy cattle to grow cannabis. Because cattle have ruminant digestion with four stomachs, they break down organic materials effectively, and their waste makes for a good fertilizer. He’ll also add rice hulls and grape pomace, or grape harvest waste material. All of those materials are regionally available.

“The most important way to get the greatest benefits from compost is to source high-quality material,” Cornell said.

He lets the compost sit for three to five months before applying it. As it decomposes, more “soil critters” come into play, according to Cornell. The fungal levels increase, as do amoebas and protozoa.

“The longer the compost sits, the more complicated and complete the soil food web inside the compost becomes,” Cornell said. “It’s that complete product that we want to add to our garden beds.”

All three of the growers say their yields have gone up using living soil growing principles, and their plants are healthier to boot.

“We’re getting better terpenes and cannabinoid expressions compared to if we weren’t to do it,” Cooley said.

Using compost teas results in a much healthier plant, he added, and healthier plants can fight off pests and pathogens. Cooley uses the teas not only for a soil application but also as a foliar spray to fight off powdery mildew.

Perkins said he has grown cannabis that yields 7 pounds per plant using living soil with no liquid nutrients.

“Sun is really all you need as long as your soil is good,” he said.

Cornell aims for about 4-6 pounds per plant. It’s not uncommon to see outdoor-grown plants test at 25%-32% THC content in the Emerald Triangle of Northern California, according to Cornell.

“We’ve had tremendous yields,” using living soil, he said. “We haven’t had any serious pest outbreaks on our farm in years.”

Cornell doesn’t worry about botrytis or powdery mildew because of this system. Healthy plants absorb nutrients quickly, he said. Instead of fending off pests and disease, cannabis can focus its energy on growing high-potency, terpene-rich flower.

As far as learning how to develop your own soil, Cornell recommends reading as much as you can and experimenting. He learned a lot from Jeff Lowenfels’ book, “Teaming with Microbes,” and the teachings of Dr. Elaine Ingham.

Another way to learn is to find someone in your area who is using living soils and volunteer to help that person, Cornell said.

“If you want to be good at what you do, you should educate yourself,” he added. “I’m always reading, always trying to push into new dime