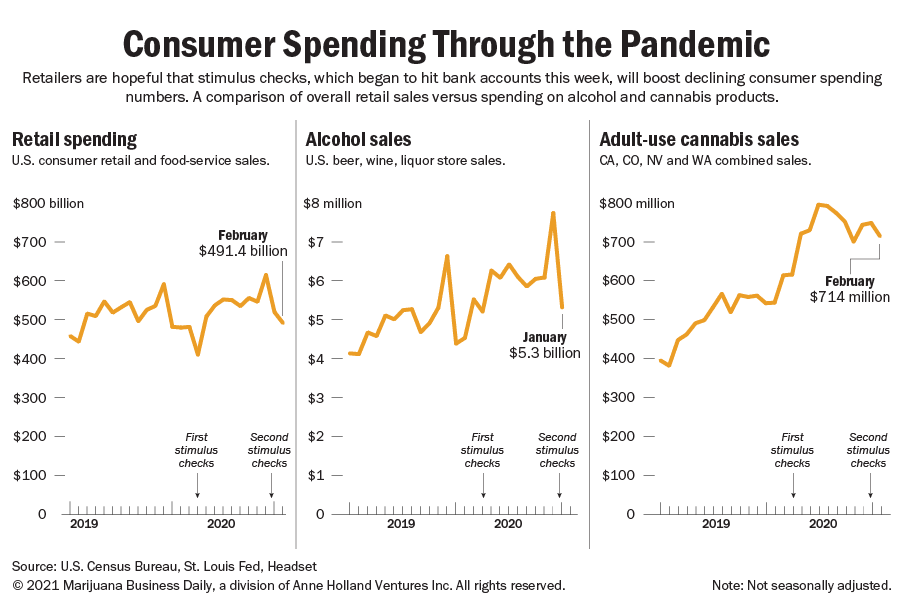 Cannabis companies will likely see a boost in sales from the third round of federal stimulus payments, providing added fuel to an industry already thriving during the coronavirus pandemic.

The $1.9 trillion coronavirus relief plan President Joe Biden signed last week puts up to $1,400 in the pockets of individual Americans depending on their income, with direct deposits already beginning to land in bank accounts.

The bill also extends a $300-per-week bonus for unemployment insurance until Sept. 6.

Jeff Yapp, CEO of Golden Leaf Holdings, which operates vertically integrated cannabis company Chalice Farms in Portland, Oregon, is hoping the stimulus gives the cannabis industry and the rest of the economy a shot in the arm.

“The stimulus checks started a great run for us last time throughout the industry,” he said. “We’re hoping we’ll get another bump.”

The previous two rounds of stimulus payments, in April and December 2020, contributed to higher retail spending overall as well as outlays on cannabis and other products such as alcohol. (See chart above.)

Last May, for example, adult-use sales in California, Colorado, Nevada and Washington state were up 17% over April after the federal government began sending out $1,200 stimulus checks.

The latest payments come as the cannabis sector already has posted record sales numbers month-over-month in state programs across the country, lending added evidence to the idea that not only is the industry relatively recession-proof, but it also has actually thrived during the pandemic.

The market has benefited from nearly 30 states designating marijuana operators as essential businesses and allowing them to remain open during the pandemic. Consumers also have turned to the plant for stress relief, among other things.

Still, there is some concern among cannabis industry officials that as the country opens up, more vaccines are rolled out and state restrictions are lifted, consumers might look to spend their money elsewhere – on restaurants or vacations, for example.

But fewer restrictions and a return to travel and tourism also mean more visitors to marijuana retailers in places such as Las Vegas, coastal California and the mountains of Colorado.

In addition, more jobs are returning as people get vaccinated, which likely will lead to additional disposable income for Americans.

Kim Stuck, a cannabis consultant in Portland, Oregon, said cannabis companies should prepare for an increase in sales tied to the checks.

“Cannabis is one of those industries that isn’t affected by the downturn in the economy,” she added.

Marijuana companies report that some of the uptick in business over the past year has come from consumers who are either trying cannabis for the first time or are returning after many years.

Those newbies might be willing to spend some of their extra stimulus cash on marijuana.

“Because of the pandemic, a lot of people had an opportunity to try cannabis who didn’t before,” Stuck said.

Those new consumers were willing to try an edible at home in lieu of going out for entertainment, for example.

Also, many Americans will probably have to endure – for at least a few more months – restrictions such as mask mandates.

“Somebody comes through our doors and has a good experience, 90% of the time they’re going to come back,” he added.

Rick Batenburg, chief investment officer and founder of Denver-based Cliintel Capital Management Group, said those new entrants are likely to spend stimulus money on marijuana because the industry is creating reliable products that are easy to use.

Andrew Livingston, director of economics and research at Denver-based VS Strategies, agreed, saying some individuals will continue to spend the stimulus money on packaged goods such as marijuana.

In Nevada, Brandon Wiegand, regional general manager for The Source, a vertically integrated cannabis company based in Las Vegas, said the stimulus money could push consumers to purchase higher-quality products.

As budget cannabis sold out in the early days of the pandemic and customers were forced to reach for better-quality product on store shelves, they grew to like the superior offerings, according to Wiegand.

Lopez said The Green Solution saw a bump in edibles sales over the past six months, but “flower is still, by far and away, the best seller,” and he believes a lot of stimulus money will go to that product category.

At Golden Leaf, Yapp said he expects more of the new consumers to spend money on cannabis as a health and wellness product. The aging population will see marijuana as a way to help them function better as they get older.

“Those who got introduced during the pandemic are going to find a place for it in their lives going forward,” he added.

As more Americans get their COVID-19 vaccines, they’re likely to spend stimulus checks on travel, which is good news for marijuana companies, according to industry officials.

Wiegand said Las Vegas is already starting to perk back up with visitors, and trade shows and events returning to the city are “a huge part of the economy.”

In Denver, Lopez saw a drop in tourism spending last summer and a little bump from skiers this winter, but nothing like normal.

He’s hoping the stimulus and the reopening of the country will get people moving again.

“A lot of people really have missed traveling and have said they’ll come back to see us,” Lopez said.

Batenburg expects to see tourism come roaring back, spurred by the stimulus and pent-up demand.

“It’s not like the ‘90s, when people were flying to Amsterdam just to smoke weed,” he said. “People are coming to do something and smoke weed.” 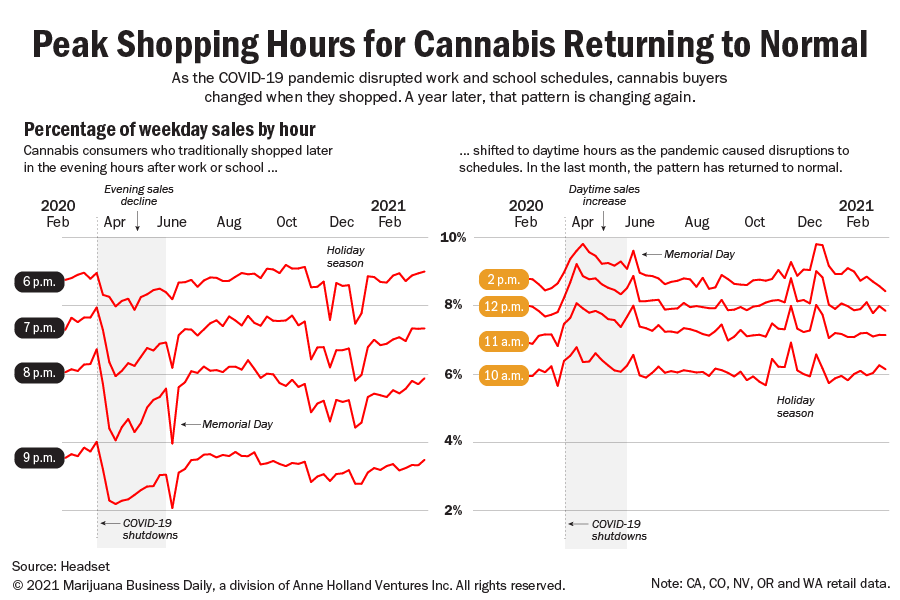 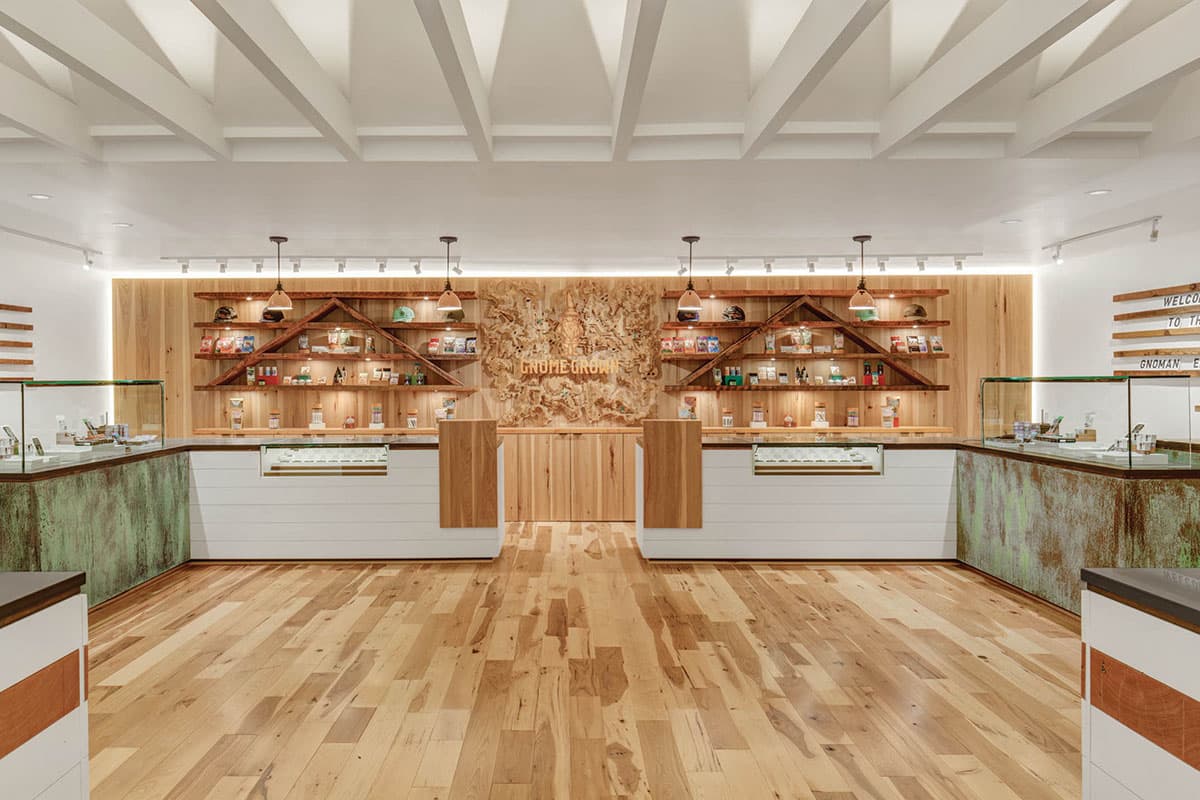 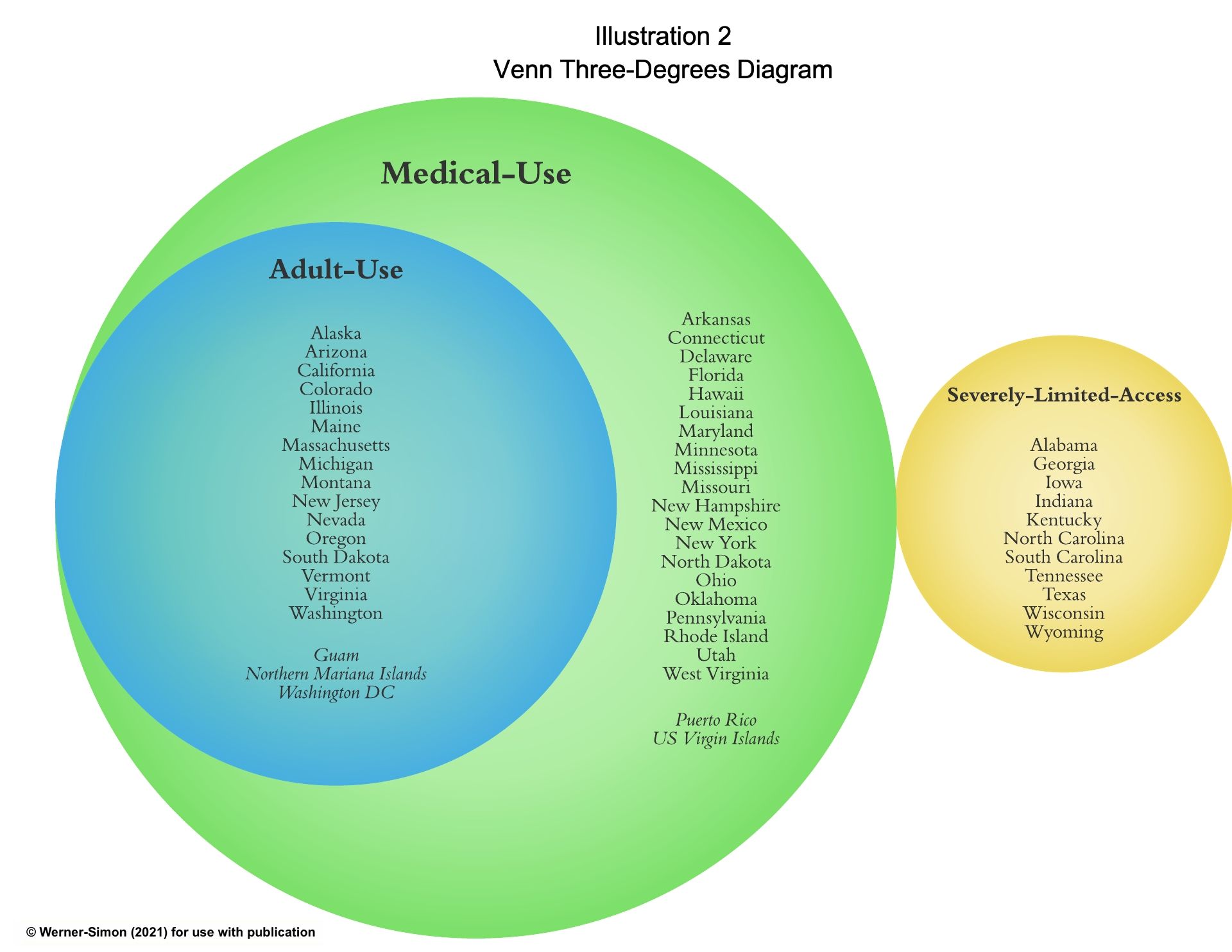