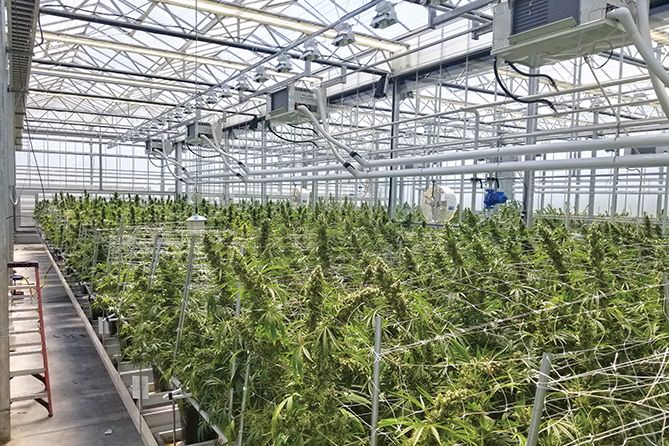 With wholesale cannabis prices tanking, growers are under huge pressure to keep a lid on costs to survive in today’s hotly competitive market.

Here are several ways cultivators can tighten their belts:

“The three most expensive things in a cultivation operation are lights, humans and nutrients,” said Jesse Peters, a Canby, Oregon-based grower who’s also director of operations for C21 Investments. “People think of price as the race to the bottom. But the real race to the bottom has to do with costs.”

Van Wingerden comes from a family of farmers who mainly grow bedding plants such as petunias, marigolds and geraniums. The knowledge that’s been passed down through three generations spurred him to design his cannabis greenhouse to operate with the smallest staff possible.

His plants are arranged on 3-foot-wide, 25-foot-long rolling tables, or benches. The self-contained custom tables include support netting, irrigation and drainage.

The benches are rolled through nine different zones of the greenhouse as the plants mature. Each zone has different temperatures, humidity and nutrients, depending on where the plants are in the growing process.

The system produces about 500 plants for harvest each week.

At the end of the 16- to 18-week growth cycle, the plants are chopped down and harvested—and the rolling table is returned to the beginning.

“The idea is that you’re not picking up and moving plants all over the place,” Van Wingerden said. “We have a greenhouse that can be operated with a minimal amount of people.”

Van Wingerden is able to run his 60,000-square-foot facility with 20 total employees—10 assigned to the greenhouse and 10 to trimming and packaging.

He guesses that a typical indoor facility would need two to three times that number to handle a space of the same size.

The $15 million facility certainly wasn’t cheap. And while he uses supplemental lighting on cloudy days, he estimates that when the sun is out, his energy costs are about 50% lower than an indoor facility.

“We looked at it from the standpoint of what’s the best long-term, low-cost production facility,” Van Wingerden said. “By far, that’s a glass greenhouse that utilizes the sun whenever it’s shining.”

He’s targeting a cost of production of $400 per pound and believes that should give him an edge over competitors who are growing indoors in warehouses, which he estimates costs roughly $800-$1,000 per pound.

Joshua Haupt, a Denver grower and chief operating officer at Medicine Man Technologies, recommends not spending too much when concocting a nutrient mix, or formula, for your plants.

“If you’re spending $50-$80 a pound on nutrients, I would highly recommend looking at that formula,” he said.

Your nutrient costs should range from $15 to $25 a pound all in, according to Haupt.

“There’s a lot of over-the-top nutrient regimens out there,” he said of available commercial formulations. “Make sure you’re not stuck in one of those.”

Van Wingerden blends his own ingredients. He uses a complex fertigation system that allows him to add ingredients such as nitrogen, potassium nitrate, calcium nitrate and phosphorous based on his own specifications.

“We’re constantly making small adjustments,” he said. “But I’m not having to pay a nutrient company to come up with these things.”

Peters of Oregon-based C21 Investments recommends cultivators move away from bottled nutrient mixes that are specifically made for cannabis.

If you can develop your own formulation, you can reduce your nutrient costs by as much as 85%, he said.

“Right now, we’re paying a lot for marketing and advertising,” he said of the commercial mixes.

But, he pointed out, it takes a lot of work and careful monitoring to test how your plants respond to your in-house formula. A good cultivator can work this out with extensive testing and experimentation.

Hiring a soil scientist or consultant to help create an in-house system is another option.

For Peters, there’s one clear cost-saver when it comes to lighting: light emitting diodes, or LEDs.

“If you are not already running LED lights or are in the process of budgeting so you can transition to them in the near term, you’re behind,” he said.

LEDs allow a grow to use less electricity to achieve the same yields, Peters said.

“When the math is done to calculate the labor cost for replacement and disposal of HID (high-intensity discharge) bulbs, the savings is vast,” Peters said. “Everyone has a different technique for how long they run their bulbs, so it’s hard to pinpoint a price.”

Based on coverage of the same space with a typical HID-spectrum grid, Peters estimates he sees 30%-50% power savings with LEDs.

“LEDs have caught up (to other lighting systems) in what they can do for the plant,” he added.

Under LED lights, Peters has seen equal terpene production with yields of up to 2.01 grams per watt and 5.09 grams per cubic foot of flowering canopy space. “That’s honestly more than we ever accomplished with HID,” he added.

Aside from the power costs to run LED lights, Peters has seen substantial savings in air conditioning and dehumidification costs because the lights don’t run as hot as the commonly used HID lights. He also believes you can save money in the long run because LEDs last longer.

Haupt recommends saving some cash by researching companies that sell lights and shopping around for the best deal.

Finally, make sure you get a warranty in case your lights fail.

“Because lights out is costing you money,” Haupt said, “you can’t let that stay that way for very long.”

Automating certain parts of your operation can also save you time and money.

“We definitely do mechanical trimming,” Van Wingerden said. “Our volume is such we couldn’t even think about staying with only hand trim.”

He still has a few employees clean up the buds before they go out to retailers, given that his trimming machines don’t catch everything.

Peters, meanwhile, said he’s seen machines that can do a better job than hand-trimmers.

“We see better trichome preservation and a ‘tighter’ trim than we can do by hand while still preserving the original shape of the flower and overall quality of the finished product,” he said. “All at a fraction of the cost.”

He said he’s cultivating indoors for $189 per pound and is trying to cut that number in half, given the slump in wholesale prices.

“When you see price compression happen like you’ve seen in Oregon, you have to find a way to be efficient or—you don’t survive,” Peters added.