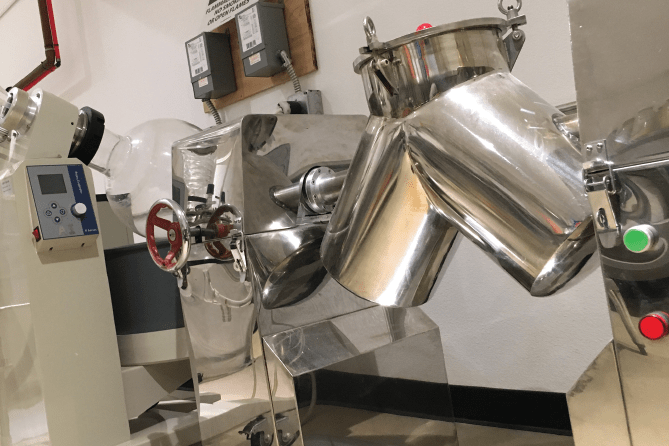 Makers of marijuana-infused products are borrowing a page from the pharmaceutical industry when it comes to accurate dosing of THC and CBD in edibles, drinks, topicals and other offerings.

Accurate dosing is a must for manufacturers of infused products. Consumer complaints about unevenly dosed edibles persist today and hurt the industry’s reputation. In March, Los Angeles County Sheriff Jim McDonnell warned that legalization of adult-use cannabis in California would lead to more overdoses caused by brownies, gummies and other edibles that transmit inconsistent dosages of THC.

Despite such warnings, dosing consistency and reliability are improving. That’s in large part because a growing number of cannabis companies that sell infused products are turning to the pharmaceutical industry for guidance and dosing technology to improve their own procedures.

“We want to take the same approach that a Pfizer or any other pharmaceutical company would take,” said Chris Diorio, a registered pharmacist who spent 26 years in the pharmaceutical industry specializing in dosing research and development for companies like Pfizer. He later joined PharmaCann of New York, which hired him as its director of R&D.

Diorio’s task at the medical marijuana company: Take the technologies, methods and processes that he used in the pharmaceutical industry and apply them to the cannabis extract niche.

“Instead of taking amoxicillin and putting it in a capsule – that is very precisely measured and monitored and then is dosed and the patient can conveniently take it, and it does what it needs to do once it gets into the stomach – the vision here is to apply all of these same technologies into our cannabinoids and extracts,” Diorio said.

Diorio is among a growing number of infused products professionals who believe the only way to achieve accurately dosed products is by using the same equipment and processes that are used in the pharmaceutical industry.

“The technology required for high-precision, cannabis-infused product production exists in the very mature pharmaceutical production sector. Cannabis companies need to realize that this level of equipment is needed to ensure the vitality of this industry and they need to be willing to and capable of making the required investments for both equipment and personnel to support this effort,” said James Hull, owner of Fairwinds Manufacturing in Vancouver, Washington, whose THC- and CBD-infused products include capsules, tinctures, topicals, coffees and suppositories.

“If they are not willing or capable of doing so,” he added, “then they should stick to producing flower and concentrates and leave the high-precision production to the technically competent and committed.”

Fairwinds, which grows its own cannabis and processes it in-house, uses laboratory-grade scales accurate to .001 grams. The company also uses metered fixed-displacement gear pumps, high-precision peristaltic pumps, digital pipettes, and – the most expensive piece of equipment, at about $100,000 – pharmaceutical-grade filling machines.

Such technology isn’t cheap. Diorio estimates that the least expensive capsule-filling machine models start at around $50,000. But some easily top $100,000.

Why is such sophisticated equipment needed for making edibles, oils and other infused products? Many states have implemented precision requirements for infused products. The products’ THC and CBD levels must test within a certain percentage – usually 5% to 15% – of what the label says.

“When you are dealing with a 10-milligram THC edible, being off 1 milligram, 10%, can change the experience for a consumer,” Hull said.

Beyond state requirements, it’s just good business to provide consumers with a product that is accurately and consistently dosed.

Another integral but often overlooked consideration in medical marijuana dosing is how the medicine is delivered to the patient – for example, in a capsule, tablet, topical or some other vehicle.

Cannabis-based medicine can be delivered in capsules that release CBD immediately so that it kicks in right away, or in capsules that release the drug slowly, say over an 8-12-hour period. Medical cannabis product producers also need to consider if their patients may be pediatric, geriatric or others who may have a hard time swallowing. And companies must consider the kind of capsule, tablet or other delivery vehicle they want to use for the medicine.

The challenge in finding the right pharmaceutical dosing equipment for your company isn’t a lack of equipment manufacturers. Quite the contrary: An overabundance of manufacturers can make it difficult to know where to begin.

“There are dozens and dozens of manufacturers,” Diorio said. “The pharmaceutical space is very large and competitive. There are numerous vendors and suppliers. Some specialize in tablet presses, others in coating machines, some in capsule fillers or transdermals and topicals.”

For those with time and resources to travel, Diorio suggests hitting pharmaceutical trade shows, including the largest one, Interphex in New York City, where cannabis entrepreneurs can see scores of models of different types of equipment they can use in their facility.

Another option, especially for those with less time and money to travel, is to hire a consultant who can help you spend your money wisely and keep you out of areas you don’t need. “A consultant can point you in the right direction a lot quicker than you spending countless hours taking trips to visit manufacturers and equipment,” Diorio said.

Diorio declined to say what brands of equipment PharmaCann uses, but he recommended going with a reputable company. “Paying a little bit more is a worthwhile investment,” he said.

Buying and installing the equipment isn’t the end of your dosing drama. Before it’s ready for production, the equipment must be repeatedly tested and calibrated according to formulas.

“In the pharmaceutical world, you start with extensive development and R&D testing with this equipment, be it filling a capsule or pressing a tablet, and then the machinery is calibrated and monitored to ensure that each time it’s delivering a proper amount,” Diorio said.

To make certain that dosing has been done accurately, the product is tested at a third-party laboratory. It’s also possible to test the release characteristics of a capsule and tablet by conducting a so-called dissolution test where it is put in a vessel of simulated gastric fluid to mimic the stomach. Samples are then taken over time to analyze how much of the THC or CBD is released after 30 minutes, one hour – four hours, whatever is appropriate for that dosage form that you’re testing.

“With so many moving pieces, we need a very smart and focused team,” Hull said. In addition, his team meets biweekly to review their processes and any issues that may have arisen. His staffers also hold frequent training seminars to “ensure our team is staying ahead of the curve, avoiding errors and always seeking improvements in processes.”

Diorio agreed. “You need a fairly high level of training to run these automated machines,” he said. “Many of them have computer interfaces and require a knowledge of computers to control the precision of the dosing and the compression. There’s also the advantage of experience.”