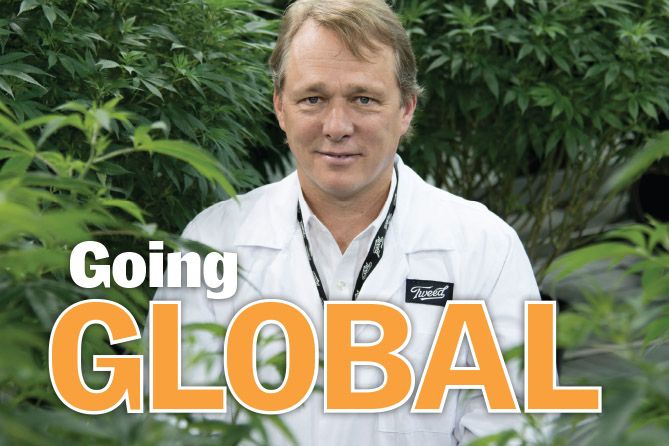 North American cannabis entrepreneurs who think it’s too early to be looking at international opportunities should think again. The plane is boarding.

This Canadian expansion is, of course, helped by the plant’s federally legal status in Canada, where government regulators have provided companies with export licenses, while governments in the importing countries have reciprocated.

Unlike the United States, these overseas markets have federal governments that consider cannabis – particularly medical cannabis – a legal plant. The ancillary and manufacturing sectors offer the best opportunities, while cultivation is more limited and retail is extremely limited.

The math, meanwhile, explains why more and more cannabis companies are turning a watchful eye overseas.

Worldwide spending on legal cannabis is forecast to reach $57 billion by 2027, led by growth in North America and Europe, according to a new report by Arcview Market Research and BDS Analytics. A study by Bryan, Garnier & Co., a European investment bank, is even more bullish, predicting a global market of $140 billion by 2027.

“The opportunities are tremendous: 640 million people in Latin America, more than 500 million in the [European Union],” said Guillermo Delmonte, president of the international division of Organigram, a licensed cultivator based in New Brunswick.

“Many countries are still importing, but that’s because they don’t have companies that are operational to meet demand. But things are moving: There are companies getting set up to do domestic production when it’s allowed.”

For U.S. cannabis companies, the most common route to international conquest has been through Canada. A few notable examples include:

“When we signed with Organigram, we knew that would give us an international opening,” said Trent Woloveck, president of The Green Solution.

The Case of Incredibles

Colorado-based Incredibles is best known for concentrates and infused products like gummies and vape oils. But the company also produces a line of big-ticket extraction machines that – while far less known – are no less important to the firm’s future fortunes.

The multistate company has sold some 90 of the extractors, including to cultivation and extraction companies in Germany, Spain and Portugal. And now Incredibles has bigger ambitions. Company executives are actively exploring international markets, attending international cannabis business conferences like Spannabis in Barcelona, which drew approximately 20,000 people in March. The goal isn’t just to sell more extractors but to get Incredibles cannabis products on retail shelves in Canada, Europe and other foreign markets.

“In 2018, strategically, the international arena really is the next stage for us,” said Lily Colley, marketing director for Medically Correct, Incredibles’ parent company.

“We’re looking for partners and joint ventures,” she said. “We’ll have a big announcement to make when Canada recreational goes online, and we also expect joint ventures and licensing deals in 2018 in other countries.”

Ancillary Firms Have an Advantage

It’s easier to start overseas if you’re an ancillary company, be it a law firm, security company or other non-plant-touching businesses.

Consider the cultivation supply firm Smart Pots in Oklahoma City. The company got its international start after meeting a distributor for Dutch lighting company Gavita International at an agricultural trade show in the United States about a decade ago.

That distributor introduced Smart Pots to Gavita’s international sales network. Executives also persuaded the Smart Pots team to exhibit at Spannabis, which the Oklahoma firm has done since 2009. Deals have resulted with garden-supply firms in Spain, Holland, Belgium, Israel, Uruguay, Colombia and Chile.

“Partnerships are key. Knowing the right people to team up with is very important anywhere, but especially in places where you are the visitor,” said Charles Jackson, vice president of retail sales for Smart Pots.

“Just walking over and saying, ‘I am here, come see what I have,’ could work for the right product. But knowing who to talk with makes it a lot easier and helps with your success. Finding those right companies is not that hard, either. Attending trade fairs and talking with contemporaries, one can figure it out pretty quickly.”

Opportunities, for the moment, are virtually nonexistent in retail, better in cultivation and somewhat more prevalent in the manufacturing and ancillary sectors. That may change over the long term, however, as overseas nations develop their marijuana industries and weigh the legalization of adult-use MJ. North American business owners who gain an early toehold would be positioned to capitalize on additional growth.

However, retail opportunities in foreign medical marijuana markets will be limited outside of Canada and Jamaica, because cannabis is sold almost exclusively through pharmacies, precluding the possibility (for now) of a retail cannabis sector.

Cultivation is also limited, because most countries with medical marijuana laws import their cannabis products or have awarded cultivation licenses to a limited number of growers.

One plant-touching niche that offers inroads to the international market is manufacturing – either by leveraging manufacturing know-how to find overseas partners or by getting infused products and other items onto foreign pharmacy shelves.