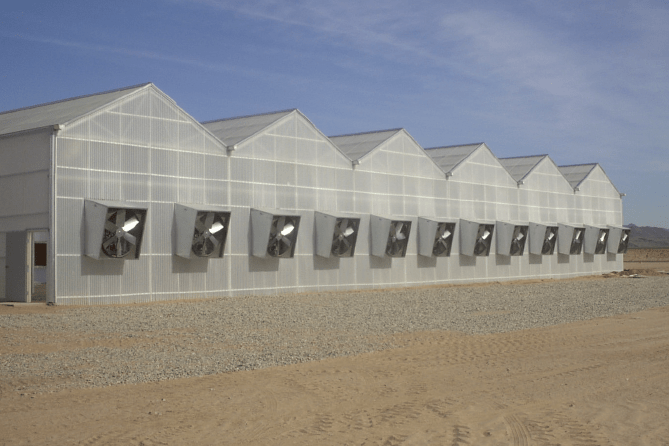 Natural ventilation, evaporative cooling among strategies greenhouse growers can use to prevent overheating

Cannabis growers increasingly are turning to greenhouses and the sun over artificial lighting.

Chalk it up to the high cost of electricity required to run an indoor marijuana cultivation operation.

But greenhouses – especially today’s high-tech models – come with their own costs and challenges. Among the most common: How do cultivators prevent a greenhouse from overheating? Greenhouses, after all, rely on the sun. Its infrared rays can heat the environment to levels that can reduce the quality of the plant, or even damage it.

That concern has spurred many cultivators who’ve flocked to sun-drenched areas like California’s Coachella Valley to opt for indoor grows over greenhouses. Many also believe greenhouse product is inferior to indoor product. And they believe the electricity required to cool a greenhouse is prohibitive.

Such assumptions aren’t necessarily true, however.

In terms of crop quality, much will depend on the particular greenhouse, with pricier models producing the best results.

Moreover, keeping a greenhouse cool is possible even in the hottest climates. It can be as easy as opening a window. Keeping it cool is also necessary in places where overheating may not be as great a concern.

Greenhouse experts say having all three and using them in combination – depending on the particular situation – is the best strategy.

“I like to have the whole quiver,” said Josh Conley, who for years worked at his grandfather’s 70-year-old greenhouse manufacturing firm in Montclair, California, before starting Next Gen, which caters to cannabis clients in several states.

A question Conley often gets asked is: How do I keep a greenhouse cool?

“This is the most common question we get from cultivators interested in working in greenhouses,” Conley said. He has plenty of firsthand experience in this area.

Based in California’s Desert Hot Springs, Next Gen has built numerous greenhouses in the area and is currently building a roughly 80,000-square-foot greenhouse project there for G FarmaLabs. Conley reckons the cost of construction will range from $25 to $50 per square foot.

But sunny locales like Desert Hot Springs aren’t the only place where greenhouse users must busy themselves with keeping temps under control.

“You can overheat a greenhouse in northern climates in the winter if you get enough sun,” said Kurt Parbst, business development director at Envirotech Cultivation Solutions in Richmond, California. “It just comes down to a heat balance, which is the rate of heat going out versus the rate of heating going in. And if more heat goes in then comes out, the temperature will rise and at some point you damage your plants.”

How you cool your greenhouse will in part depend on what kind of greenhouse you have. Matt Cohen, a longtime cannabis grower who founded and now leads TriQ Systems, a greenhouse manufacturing and equipment company in Bend, Oregon, categorizes them as low tech, medium tech and high tech.

Low-tech greenhouses are basically cold-frame hoop houses that small-scale growers use. They are constructed of curved steel bars and draped with polycarbonate sheets, and the only cooling method is to manually lift a flap to let warm air out and bring cooler air in from outside.

Much more common are medium-tech greenhouses, which are more durable and permanent. They tend to have vertical walls, are taller and can be made from glass or polycarbonate panels of varying thicknesses. They can be outfitted with vents, fans, dehumidifiers and air conditioners.

They’re also automated. Automation can mean something as simple as a thermostat that triggers fans to come on once a certain temperature is reached, or software programmed to regulate the temperature. But medium-tech greenhouses are not as well sealed as more high-tech models, allowing CO2 to escape and resulting in a product that is good but not great.

To grow greenhouse cannabis that is as good as indoor-grown cannabis requires a high-tech greenhouse. The high-tech models are also made from polycarbonate panels or glass but have better insulation and more sophisticated automation and technology than their medium-tech counterparts.

High-tech greenhouses also have software systems that predict weather. And the software can open and close venting systems, start air conditioners and dehumidifiers and generally run the facility.

“Of course they cost more, but the return on investment is profound,” Cohen said. He estimated that high-tech greenhouses cost 20% to 40% more than medium-tech green houses, but the difference in investment can be recoupled within a year.

High-tech greenhouses, for all their bells and whistles, still incorporate the simplest method of cooling: natural ventilation – i.e., cracking a window or vents located on the sides or ceiling of the greenhouse.

“When you’re using natural ventilation, you bring the air in low and let it exhaust high,” said Parbst. “That is the dominant method for modern, high-tech greenhouses, just because you can avoid the cost of electricity. And it’s very effective.”

Some greenhouse growers like to complement natural ventilation with a fogging system that sprays a mist over the canopy. The mist is so fine that the water evaporates before it hits the plant. Such a system works well early in a plant cycle, when plants contain less moisture. But the system doesn’t work as well when plants are flowering and contain more moisture: That can result in added humidity, leaving the plants vulnerable to mold or root rot.

The downside of natural ventilation is that growers have little control over the outside wind speed and temperature, both of which must be adequate to lower the temperature to the desired levels.

In such cases, cultivators turn to evaporative cooling. This method uses fans and wet pads placed at the far ends of a greenhouse. It relies on a chemical reaction where water, when it evaporates, cools. The fan blows the cooled air through the greenhouse, while another fan at the opposite end sucks out the overheated air.

This method works well in desert climates where the air is dry and can absorb higher levels of moist air created by the evaporative cooling system. Evaporative cooling is least effective in coastal climes – think Florida or Maryland – because the humid air doesn’t absorb the evaporated water as well, and so it cools less efficiently.

Growers who operate a mechanical cooling system shouldn’t turn all their fans on at once, experts advised. Rather, they should turn them on and off incrementally to jibe with the rising and falling temperatures outside, so the temperature inside stays consistent.

In the morning, for example, a grower may start by simply opening vents to generate 15% to 20% of the desired cooling needed, and later in the morning turn on more fans to generate another 25% to 35% of needed cooling. More fans should be turned on incrementally during the afternoon, so they eventually operate at full capacity. They should be turned off gradually as outside temperatures drop again.

If a greenhouse is in a humid climate where evaporative cooling is less effective, growers can get greenhouses with built-in, automated shade curtains or screens that can block the sun and lower the temperature without emitting damaging amounts of humidity.

Many cannabis greenhouses also incorporate air conditioners – although in the future such cooling technology may prove uneconomical, depending on the going price for cannabis.

“Economically, it can be supported by the price levels cannabis has now, but there aren’t a lot of commercial horticulture crops that can handle air conditioning,” Envirotech Consulting’s Parbst said. As cannabis prices drop, growers may be unable to afford the electricity prices they incur today.

If a grower is going to use air conditioners in a greenhouse, he or she should not operate them during the day.

Rather, he prefers to use natural ventilation and evaporative cooling during the day and then switch to air conditioners at night when the plants are letting off humidity.

“When the temperature drops, humidity goes up. So at night, humidity increases,” Parbst said. “You should shut down ventilation, close the fans, have a tight environment and dehumidify the greenhouse for disease suppression.”

While all of these methods have their advantages, the best greenhouses incorporate all of them. That way, a greenhouse cultivator doesn’t have to waste money on mechanical cooling or air conditioning when natural ventilation is enough. At the same time, however, a grower can use those more robust methods if the situation warrants.

Referring to his G FarmaLabs construction project, Conley noted: “We’re slated to install all these systems in Desert Hot Springs, because you’re going to need all the cooling you can get.”