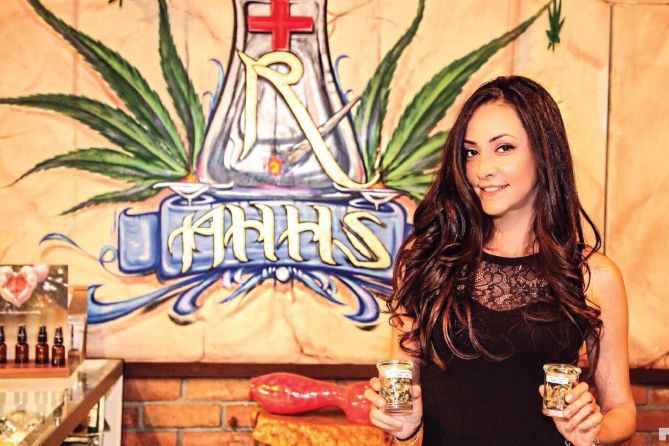 In addition, the Alternative Herbal Health Services store, on Santa Monica Boulevard, was redecorated inside to look like Ruth’s Alternative Caring – the dispensary featured in “Disjointed,” which aired its first 10 episodes in late August 2017.

Such co-branding is a hot trend in mainstream consumer marketing. Cover Girl developed a Star Wars-themed line of “light side” and “dark side” makeup. Uber and Spotify promote “soundtracks for your ride.” BMW and Louis Vuitton collaborated on a campaign, “The Art of Travel,” that showcased the craftsmanship and upscale masculinity of both brands. It included a $20,000 luggage set designed to fit in the rear parcel shelf of a $135,700 BMW i8.

While not the first in the marijuana industry, the Netflix-Alternative Herbal Health Services partnership appears to be the most wide-ranging and could serve as a template for other MJ businesses seeking to exploit a pop culture tie-in.

The Netflix collaboration proved to be a media coup and garnered international press attention. Such partnerships, scaled for a specific market, can help a cannabis business gain media exposure in mainstream channels and attract new customers.

“This is the first truly mainstream collaboration,” said Dina Browner, co-owner of Alternative Herbal Health Services and a consultant for “Disjointed.” As someone who advises marijuana brands on marketing and product development, Browner sees “endless opportunities” for partnerships as legal markets expand.

A Partnership is Born

Alternative Herbal Health Services is not your typical dispensary. First opened in 2004, the store is literally down the street from Hollywood, with a client list that includes rapper Snoop Dogg, who gave Browner her nickname, “Dr. Dina.”

The Netflix promotional partnership came about because Browner began working with “Disjointed” co-creators Chuck Lorre and David Javerbaum from the show’s inception. She has lent her cannabis expertise to other films and shows and is credited as a cannabis consultant on all 20 episodes of “Disjointed.”

Initially, Browner was skeptical when showrunners first approached her. “I assumed they’d make fun of us, but then I read the script,” she said. “They make fun of everybody equally. It’s a sitcom.”

As cannabis consultant, she worked with writers and on set to depict day-to-day life in a dispensary. The producers wanted somebody who knew the details, Browner said. “They gave me the script. I said, ‘Jack Herer was not a strain in 1973.’ They said, ‘You’re hired.’”

Browner said her life was the inspiration for both Ruth Whitefeather Feldman, the protagonist of “Disjointed,” and Nancy Botwin, the main character in “Weeds,” a Showtime series about a suburban mom turned dealer.

Dispensary Gets a Makeover

The promotion required an interior makeover for Alternative Herbal Health Services, given that a separate faux storefront wasn’t possible. So the Netflix creative team turned the dispensary into a replica of Ruth’s Alternative Caring.

Designers wrapped the walls of the West Hollywood store to resemble the “Disjointed” set, with blackboard menus, signage and a sunset mural.

It took about four days, Browner said, and people liked the new décor so much she kept it in place after the premiere weekend. Another pop-up promotion for “Disjointed” will take place when the next 10 episodes are released in January.

Netflix, for its part, said the “fan activation” campaign built awareness before the launch of “Disjointed” by engaging fans of its other hit shows, including “Arrested Development” and “Orange Is the New Black.”

Netflix’s design shop, Brooklyn, New York-based Carrot Creative, worked with Browner for months to curate 12 cannabis strains. Carrot suggested a mood for each show, and Browner matched them to the taste and effects of existing strains, then coordinated production with her store’s team of growers. Carrot designed the glass jars with wood stoppers and colorful labels.

The new strains included fictional hybrids alluded to in “Disjointed” episodes, including Eve’s Bush, an indica hybrid “for getting in touch with your inner goddess,” and Rutherford B. Haze, a sativa hybrid. While the strain names were fictitious, their contents were real: Inside each glass jar was an eighth of an ounce of cannabis.

Netflix and Carrot declined to comment for this story. But Carrot’s executive creative director, Jonathan Santoro, told Adweek that Netflix’s attorneys approved the partnership with Alternative Herbal Health Services and carefully worked out the legal details.

“Netflix or Carrot never physically touched the flower,” Santoro told Adweek. The strains were packaged and sold by dispensary employees. Alternative Herbal Health Services purchased the marijuana and kept all the proceeds. By contrast, Netflix, co-creator Lorre and Warner Bros. Television did not have a financial involvement in the cannabis itself.

The eighths sold for $35-$65 including tax, the regular prices for the cannabis used in the fictitious strains. Each buyer on premiere weekend also received a free gift bag with “Disjointed” swag, including a hat, T-shirt, lighter, pins and stickers.

Netflix provided the decorations, promo packaging and gift bag items and also paid for extra services for the premiere party at the store, such as security and valet parking.

The promo was successful. About 27 pounds of the promo strains sold out in hours, Browner said, as cast, crew and fans of “BoJack Horseman,” “Grace and Frankie” and other Netflix shows came in to check out the merchandise.

As a consultant on “Disjointed,” Browner tapped her nearly 15 years of expertise as a cannabis retailer, beginning with script development. She spent six weeks with the writers, helping them understand how a dispensary works. She fact-checked that the strains were what a real caregiver would recommend for a particular medical condition.

And she convinced the writers to include a U.S. Drug Enforcement Administration raid in the final episode. Together, they figured out how the show’s characters would violate federal law in a way that would not break the audience’s emotional connection with the cast.

To create an authentic-looking dispensary set on the back lot at Warner Bros., Browner worked with the show’s set designer to develop realistic displays and product assortment. Instead of stocking the dispensary set with fictional brands, she contacted her vendors, including Raw Natural Rolling Papers, based in Alcoy, Spain; Kiva Confections, a maker of infused chocolates and mints from Oakland, California; and Hitman Glass, a Los Angeles supplier of water pipes.

Actual cannabis was not allowed on the set. So the vendors provided empty packages or unmedicated versions of their products. The prop marijuana flower on the set was a British concoction, Honeyrose Earth Impact, made from wild lettuce, clover, mallow leaves and rose petals. “It tastes like a Russian brothel and a cat litter box combined,” Browner quipped. “You can see it on people’s faces” when they take a hit.

The brands weren’t charged for product placement, which can typically cost $25,000-$500,000 for a streaming series, according to the marketing agency Hollywood Branded.

For the final episode featuring the DEA bust, Browner showed the actors video of a real raid at her dispensary. “She had it on her phone,” Bates said. “Twelve guys in the black SWAT things, coming in this tiny little dispensary. It was very scary.”

Browner also coached the actors playing DEA agents. It was an intense day on set, Browner added: “Kathy would say, ‘Dina, what should I be feeling right now? What’s going through my mind?’”

Browner said there’s power in being able to show 100 million Netflix viewers that cannabis is healing medicine, that the feds can shut down a state-licensed business and that regular people use marijuana. “Anytime you put what we do in people’s living rooms, we break stigma,” she said. “That’s the victory.”