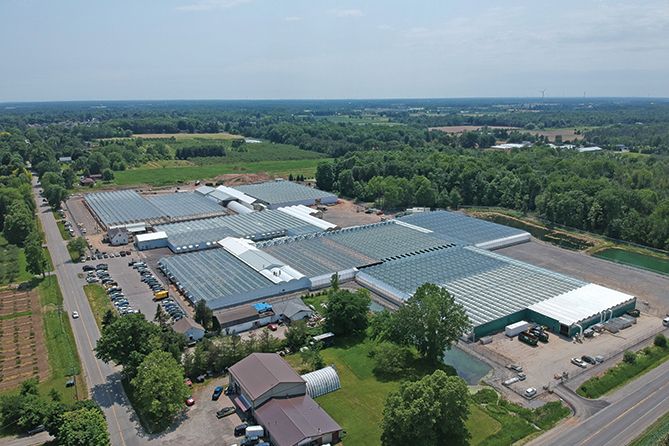 When Canada launched the nation’s adult-use market last October, it became evident to companies such as CannTrust they would need to ramp up their production capacity to meet demand. For now, only dried flower and various forms of cannabis oils are legal. But CannTrust executives have been busy preparing for the expected introduction of cannabis-infused products later this year.

“With the upcoming legalization of edibles, concentrates, beverages and more expected in 2019, there will be an increased need for resin,” said Jeffrey Zietlow, CannTrust’s vice president of marketing.

“Cannabis plants that are leveraged for extraction of resin can be grown with a much lower cost as the plant is broken down and the resin is extracted. CannTrust will use its proprietary seeds and genetics to ensure that we are growing the cannabis plants with an industry-leading cost structure.”

When CannTrust launched in 2014, its 40,000-square-foot cultivation facility in Vaughan, Ontario, was considered a large and ambitious undertaking in the medical marijuana industry. But it wasn’t big enough. So the company replaced the original grow with its current 450,000-square-foot facility in Niagara, which produces 110,231 pounds (50,000 kilograms) annually and employs about 250 people.

In addition, the original grow in Vaughan was expanded by 60,000 square feet and repurposed. The facility is now where CannTrust prepares and packages its portfolio of products.

With Canada’s introduction of adult-use sales, CannTrust is increasing its production capacity even more with the construction of a 600,000-square-foot greenhouse adjacent to its existing Niagara facility. The first harvest at the new facility, which will double CannTrust’s annual capacity, is expected to take place this fall.

CannTrust has implemented systems in its greenhouses that ensure its products are consistent. The goal: If a customer buys CannTrust-grown Kush with a 20% THC level one day, he or she can return to the dispensary weeks later and be guaranteed the product will be the same.

“Supplemental lighting ensures there is enough light 365 days a year. Plants begin uniform, as they are cuttings from mother plants and are selected for uniformity right through to flower. A lot of attention to detail goes into pruning the
flowering plants to ensure a consistent harvest.”

That, in turn, creates a steady production cycle and a more stable and predictable work environment for employees because they are performing all grow and harvest tasks every day. There are no temporary workers, only skilled staff.

In a typical greenhouse operation, all seedlings are transferred to a grow room, where they reach maturity on a 10-week cycle. The plants are harvested and the room sanitized, and the cycle begins again. This creates downtime, which is eliminated with a perpetual harvest system.

“We dedicate specific rooms for each activity, which means that CannTrust is harvesting almost every day of the year, creating predictable and consistent harvests,” Green said. “To harvest every day, we must also propagate, transplant, prune and de-leaf every day. This results in very efficient grow teams.”

CannTrust partnered with New York-based Breakthru to distribute its products because it has a track record of building good relationships with retailers. Breakthru—whose clients include Red Bull, Constellation Brands and Diageo—is one of

“Breakthru is the country’s leader in representing top beverage alcohol brands in the marketplace,” Zietlow said. “Their progressive model, sales technology, infrastructure and extensive relationships across Canada make them an ideal fit for CannTrust’s business strategy.”

The cannabis sales brokerage operation is part of a newly formed subsidiary of Breakthru Beverage Group and is separate from its alcoholic beverage brokerage, Breakthru Beverage Canada. CannTrust hopes to leverage Breakthru’s North American business insights, strategies, technology and analytic tools to stand out in the marketplace.

In addition to serving as a distribution partner, Breakthru has invested in CannTrust. An affiliate of Breakthru Beverage Group invested roughly $7 million (CA$3 million) in CannTrust, with an option to boost its stake if the Canadian cultivator exceeds certain sales thresholds.

Though marijuana is legal across the country, Canada’s provinces are dictating whether it’s sold through privately owned dispensaries or government-operated stores. Some provinces are implementing public-private partnerships to run the shops. CannTrust is working directly with the provinces to facilitate supply agreements. Kindred, a wholly owned subsidiary of Breakthru Beverage Group, will represent CannTrust’s cannabis products to Canada’s adult consumer market.“We believe our partnership with Breakthru will help us develop our retail channel,” Zietlow said. “Our partnership with Kindred allows us to hit the ground running, utilizing their proven business model, sales technology, infrastructure and extensive relationships across Canada.”