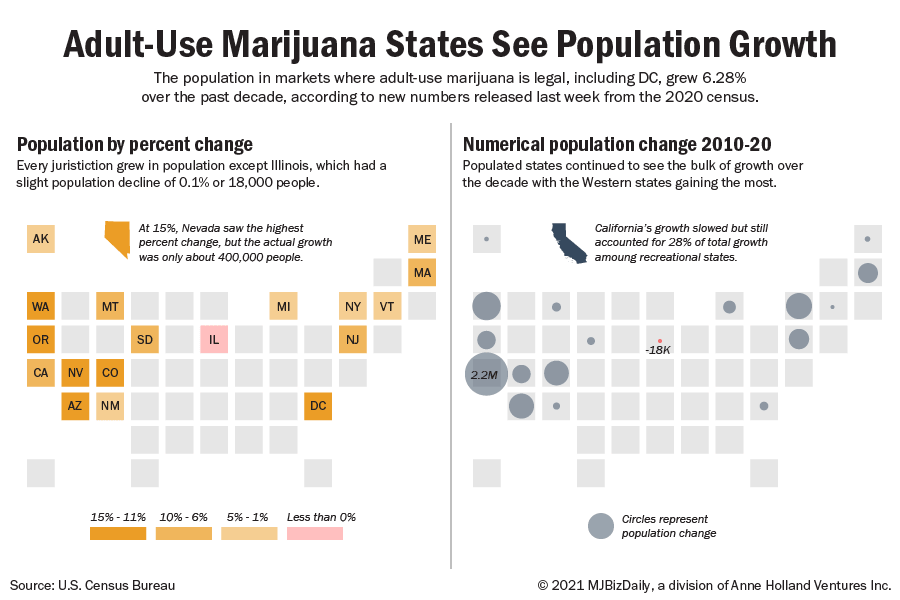 The population in the 17 states where recreational cannabis is legal, as well as Washington DC, continued to grow over the past decade, a good sign for those markets in terms of potential marijuana consumers.

But overall U.S. population growth has slowed to Depression-era levels, according to an analysis of the 2020 population data released last week by the U.S. Census Bureau.

The slowdown has been attributed to recent immigration restrictions, an aging population and overall lower birth rates.

The data underscores how all businesses, including cannabis companies, must be alert to the nation’s shifting demographics, with the South and the West continuing to outpace the East and the Midwest in terms of population gains.

The census data also has ramifications for the political makeup of Congress, with adult-use states together experiencing a net loss of one member of the House of Representatives.

The 18 jurisdictions where recreational marijuana is legal – including Washington DC – grew a little more slowly but together increased by 6.3% and accounted for about 8 million of the nation’s overall population gain.

Nevada experienced the highest rate of growth, increasing 15% over the past decade and adding about 400,000 people.

California’s population grew only 6.1%, but that equals an additional 2.2 million people in the past 10 years.

Western states topped the list of numerical gains with Arizona, California, Colorado and Washington accounting for more than 60% of the population growth among markets where adult-use marijuana is legal.

Massachusetts, New Jersey and New York contributed to growth on the East Coast, adding 1.8 million people among them.

Illinois was the only recreational marijuana state that experienced a slight decline, losing 0.1% of its population, or about 18,000 people.

The latest census numbers show the slowest U.S. growth since the decade that included the Great Depression, 1930-40.

Marijuana states that reported record growth rates for 2000-10 – such as Arizona, Nevada and New Mexico – slowed by as much as 20 percentage points this time around.

With immigration a major driver of population growth, and that policy being decided by Congress, it is hard to tell if the slowing growth will continue in the coming decade.

But, for now, states that allow adult-use marijuana continue to grow – albeit not as quickly as in the past.

The U.S. Census Bureau was required to release these first set of population numbers from the 2020 census to determine apportionment.

Apportionment is the shuffling of the 435 voting seats in the U.S. House.

Each state gets a set number of seats based on their population counts after the census is concluded every 10 years.

Recreational marijuana states had a net loss of one representative for reapportionment.

Three states each gained a seat:

Four each lost a seat:

Time will tell the impact of those changes.

States will now redraw congressional boundaries based on the new population numbers, a process that can be contentious depending on the party in control of the process.

Of the 17 states where recreational cannabis is legal, only one is completely controlled by Republicans, who have traditionally been opposed to legalizing marijuana.

The remaining states are controlled by Democrats or independent commissions or have joint-party control.