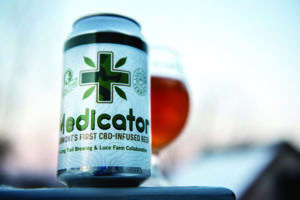 Hemp, CBD and extraction companies can crack the infused alcoholic beverage market but must navigate a regulatory thicket

When Prohibition was repealed in 1933, small, local brewers and distillers were the first to get back into the alcohol business. Many either grew into national brands or were snapped up by larger companies looking to expand.

“We’re in a unique moment in time. There are no big hemp or CBD alcohol brands yet, so there’s a window – maybe for the next three to five years – to establish a brand,” said Smoke Wallin, chief marketing officer and president of distribution for Vertical, a company in Agoura Hills, California, that is developing a CBD oil that can be infused into alcohol.

“I’m absolutely certain the Anheuser-Busches, the Bacardis, the Jack Daniel’s are going to get into this, but they will wait until marijuana is fully legal to do it,” said Wallin, who has more than 25 years of experience in the alcoholic beverage business. “Anyone that can get a brand established in the meantime, and show traction, is going to be very attractive to the big players.”

That translates into business opportunities for hemp growers, CBD producers and companies that extract oils such as cannabis terpenes. Those products don’t carry the same stigma in the United States as THC-laden marijuana, but it won’t be a slam dunk.

The marriage of alcohol and cannabis faces unique regulatory and legal hurdles, making it difficult for hemp, CBD and extraction companies to produce their own booze. The simpler option for those companies is to sell their products to alcoholic beverage manufacturers to get a foothold in what could become a lucrative product niche.

That’s what Joe Pimentel did. In 2017, Pimentel, the owner of Luce Farm in Stockbridge, Vermont, decided to start producing CBD-infused honey to set his farm apart from other area hemp growers. He approached Long Trail Brewing in Bridgewater Corners, Vermont, about carrying the honey in the brewery’s restaurant and gift shop.

“The CBD hemp market is so immature, so our strategy is to align with a lot of Vermont brands that are better known than ours,” Pimentel said.
Long Trail decided not only to sell the honey, but also to make a beer with it. “We liked that the hemp gives us new flavors we can’t get anywhere else,” said Head Brewer Ian Harbage. But the honey played havoc with the beer’s consistency, so the brewers opted for Luce’s CBD extract and hemp terpenes instead.

Terpenes are separated out at the beginning of the hemp-extraction process, like an essential oil, and then the CBD extract remains. Pimentel used to do his own extractions, but “nothing we could create in our kitchen had consistent levels of THC,” he said.

He started researching the best extraction techniques and decided on a carbon dioxide method offered by the PhytoScience Institute in Waterbury, Vermont. PhytoScience now handles all of Luce Farm’s hemp extractions, and the terpenes are consistently documented at less than 1 part per million THC.

CBD has more health properties but not as much flavor and aroma as terpenes. “The main terpenoid in cannabis is the main flavor in hops, which makes terpenes and beer a good partnership,” said Andrew Follett, the owner of Philadelphia-based Keystone Canna Products, which was founded in 2014 to help hemp farmers distribute nationally.

Follett also said CBD, which has a slightly nutty flavor, is a better option for wine and spirits manufacturers that don’t want a distinct cannabis taste or smell in their products. But he noted that it takes time, effort and creativity to mix the oily product into beverages, which can deter some brewers and distillers.

Like the cannabis sector, the alcohol industry faces a web of regulations – in this case from both the states and the feds. Consequently, hemp, CBD and extraction companies must be aware of the complicated regulatory process when wading into the alcohol business.

The U.S. Drug Enforcement Administration’s declaration in December 2016 that CBD is a Schedule I controlled substance – like marijuana and heroin – complicated matters. Last year, a Colorado craft beer producer, Dad & Dude’s Breweria, butted heads with the feds over the brewery’s production of a non-THC, CBD-infused beer. Dad & Dude’s had previously won approval for the brew from the federal Alcohol and Tobacco Tax and Trade Bureau (TTB). The brewery, which continues to sell the beer on its premises, is for now locked in a legal battle with the DEA as well as the agency.

The TTB, meanwhile, presents other hurdles. Any alcohol company that sells across state lines, for example, must secure approval from the agency. Back in 2000, the agency’s predecessor issued requirements covering formulas, processes and labels for domestic hemp products. The policy requires all alcoholic beverages that contain hemp or a hemp component to submit a lab report stating the amount of THC in the hemp, a move that dovetails with the DEA’s policy.

“It follows the DEA’s rules, and the intent of those rules are to ensure the product is THC-free or has trace amounts,” said Ryan Malkin of Malkin Law, a Miami Beach, Florida, firm that specializes in alcohol law.

Hill said the key was to supply the agency with lab tests showing the hempseed oil used in her sweet, citrus-based wines had less than 4 parts per million THC, and that the oil was derived from hemp stalks, roots or stems rather than flowers or resin, which is considered a Schedule I substance by the DEA.

“You have to be careful where you get your hempseed oil from,” Hill said. “I had one that was 3% THC, from mature hemp stalks, and the DEA said that was too high, so the oil must be coming from hemp resin.”

Hill found her suppliers through a list provided by the Texas Hemp Industries Association and by simply Googling hempseed oil companies. She read product reviews and then called the companies to check their references and lab work documentation.

Hill eventually partnered with Keystone Canna Products. Its hemp oil and food brand, Cannagenix, specializes in paper trails and lab testing, according to Follett, the owner.

“There are a lot of hemp and CBD products but not a lot of quality documentation,” he said, noting that growers and CBD companies that can’t produce a regulatory paper trail are likely to be shut out of the alcohol business.

Hill said even though TVM’s wines contain CBD, they’re labeled as “hemp seed oil infused” because the TTB and DEA preferred the word “hemp” to “CBD.”

But, like most cannabis law, this is a gray area. The determining factor appears to be where the beer, wine or spirits are sold. Even if alcohol doesn’t cross state lines, regulations vary from state to state, just as they do with cannabis.

So far, Long Trail’s Medicator beer hasn’t run up against the TTB, even though the can says: “Vermont’s first CBD infused beer.” But the company has made only three small batches and has limited sales to the brewery’s pub.

“There is no THC in the beer, so we simply made the beer and did not ask for permission to do that which we do every day,” said Lagunitas founder and Executive Chairman Tony Magee. “However, the TTB became interested, and we are talking with them about it right now. I’m pretty confident they will understand what we intend to do, and we’re looking forward to making a whole lot more of it.”