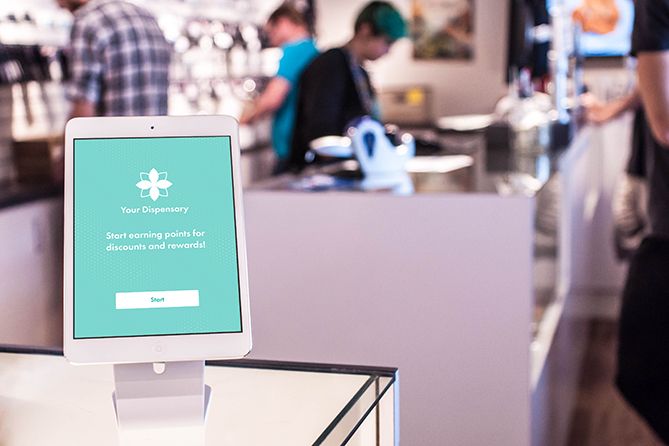 Joel Milton avoids running in place. The CEO of Baker Technologies has engineered two dramatic changes that launched his Denver technology company on an entirely new trajectory than when he founded it four years ago.

More recently, Baker was one of four marijuana businesses from the United States and Canada that agreed last spring to merge into a multinational company specializing in cannabis technology, cultivation and support solutions. Operating as TILT Holdings, the combined revenue of the foursome is forecast to total more than $200 million in 2019, with the new venture slated to trade on the Canadian Securities Exchange.

“We’ll be part of a much bigger entity and able to offer more than we could on our own,” Milton said of the deal. He also believes the marriage will make it much easier to raise money from investors.

Studies show it is anywhere from five to 25 times more expensive for a retail store to find a new customer than to retain one it already has.

That might be why business has been good for Baker. The CRM company works with more than 1,000 dispensaries in 24 states and Canada.

Baker’s platform, among other things, allows dispensaries to:

How did the B2B pivot happen?

Milton founded Baker in 2014 as an online ordering tool for dispensaries. It allowed dispensary customers to place an online order and then pick it up once the desired products arrived at the store.

Milton watched business grow in 2015, though that year, he said, “We had just six employees, zero dollars in revenue and just 15 stores on the platform.”

By early 2016, however, Milton started thinking about changing the company’s direction – in a major way.

“We recognized there was a bigger problem,” Milton said of the company’s dispensary customers. “We realized they were spending so much money on customer acquisition but were doing nothing to keep people coming back. They didn’t even know what customer retention was.”

Milton set out to help dispensaries fix that problem. He focused less on attracting new dispensaries to Baker’s platform and more on helping them drive traffic to their websites.

Baker saw an immediate uptick in sales – and the company overhauled its business model.

Since the beginning, the biggest challenge for Baker has been raising money to expand the business.

When he first launched Baker, Milton had to raise $250,000, which proved difficult.

“We essentially pitched people on a concept. On top of that, it was during a time when cannabis was far less accepted nationally than it is today,” Milton said. “Fortunately, we found a few people who believed in our vision.”

Luck was on his side, too, thanks to an early stage venture fund and seed accelerator.

“We nearly ran out of money and would have likely struggled to raise our next round had we not been accepted into 500 Startups, the accelerator program in San Francisco, which comes with $125,000. After going through 500 Startups, we got additional traction with our product and then raised $1.6 million,” Milton said. “It still wasn’t easy: We had to pitch more than 150 different investors and collected the round primarily in $25,000 and $50,000 chunks.”

Raising $8 million in August 2017 was difficult, too. “There weren’t very many investors who would write $1 million checks to private U.S. companies in the cannabis industry at the time, and again we met with north of 100 people before we could close the round,” Milton conceded.

But Milton said he learned a lot from 500 Startups, noting it “taught us we needed to measure everything and really focus on being data-driven with our decision-making. It also helped me become better at fundraising.”

He added: “I have learned it takes more meetings than you initially think. When you start to gain traction, don’t slow down. It’s important to keep the pipeline full. Before taking a meeting, first ask investors if they can invest in the cannabis space. Many investors are trying to learn more about businesses in the space but aren’t actually able to invest.”

Milton hopes fundraising will soon get a lot easier. Just as the time was right for the B2B switch, he determined in May that it was an opportune moment for Baker to merge with three other companies to become TILT. Baker continues to offer its same services as a part of the new company.

Milton serves as the new venture’s president, overseeing the technology side of the business. He leads software and services divisions – everything that falls under the B2B banner.

TILT plans to use that money to acquire more companies and to operate in every state where cannabis is legal.

“Baker is the backbone,” Milton said, “and we’ll be doing additional M&A around that to offer additional services to retailers.”

“We’ll be part of a much bigger entity and able to offer more than we could on our own,” he added. “It really comes down to providing more value to our customers. Since TILT is vertically integrated, we are able to offer a holistic service approach to business owners in the space.”