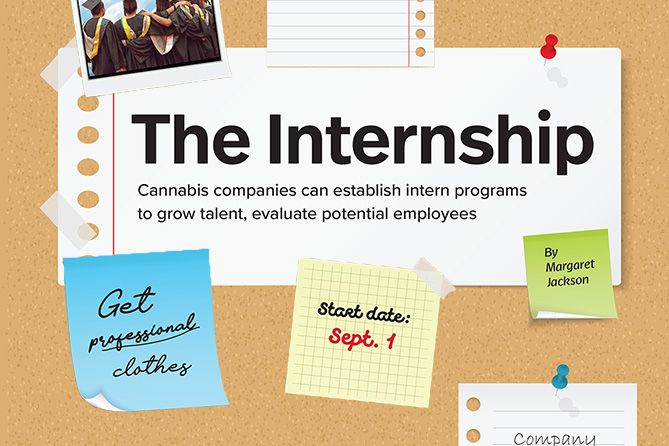 Plant-touching and ancillary businesses are developing internship programs to cultivate talented college students and graduates who are interested in careers in cannabis.

From cannabis testing labs to dispensary software businesses, companies are opening their doors to students with the hope that when the top performers graduate, they’ll come on board permanently.

High There, a cannabis-focused social media community based in Boca Raton, Florida, uses internships as an opportunity to groom talent and hire interns when the program ends.

“We’re looking to grow talent from within,” said High There Chief Operating Officer Squire Velves, who previously worked in the music and sports business industries. “In my experience, I have found it difficult to source talent from the open marketplace. It’s random resumes you get from everywhere.”

Internships enable companies to evaluate potential employees’ talents and hire them for the appropriate position, added Velves, noting that people from the generation filling internships and landing full-time jobs today either have the skills or can learn them on the job.

“It’s all about the work ethic these days,” he said. “The deciding factor for us is more so the work ethic than skill set. If you have a work ethic and a desire to learn and be inquisitive, that means you are willing to do the job.”

Boca Raton, Florida-based SpringBig, a cannabis customer relationship management (CRM) and loyalty rewards software provider, brought on two interns in May. SpringBig lets its interns choose what area they want to work in after they get a feeling for the company and what it’s like to have a job.

“When you’re an intern, you’re too young to know what a job is,” said Natalie Shaul, the company’s vice president of marketing. “We want them to be happy. Happy workers put out better work.”

Take Michael Haynes, for example. In February 2018, the Florida Atlantic University student started as an intern in SpringBig’s sales department. Every day, Haynes received a list of retailers in his assigned region. His task was to call each one and try to get the dispensary’s manager on the phone to demonstrate SpringBig’s system on a shared computer screen.

“After a few months, it kept coming up how I was a computer science major,” Haynes said. “They saw my tech background as an asset, and I transferred to product development three months after I started.”

Haynes said he was learning more at SpringBig than he was in school, so he cut back on his course load to work full time at the company. Instead of completing his degree next spring, he’ll graduate with the class of 2021.

At SpringBig, Haynes said he’s learning how a business is operated and how to write code and queries. And because he was among the company’s first employees, he’s seen how it has grown from the ground up.

“I need that degree, but I’m still learning more at work than at school,” he said.

High There has hired four summer interns: two in data analytics, one in marketing and one in mobile app development. The internships generally last three months, and interns are paid $17-$20 per hour, based on experience. Interns also can earn college credit for their efforts.

Interns in the marketing department collaborate with High There’s management team to create a social calendar of events and work with the content team to publish blog posts about products, culture and trends, taking a cue from current events and the season. They also may coordinate logistics for events held by the company’s retail partners, including printing posters, creating a theme and setting up High There’s brand ambassadors on-site.

“This is definitely hands-on, and you’re learning valuable characteristics from high-level professionals,” Velves said. “There’s a lot to learn about diplomacy, congeniality and corporate culture. I want interns to walk away with that.”

High There’s intern orientation covers policies and procedures, fire drills and evacuation procedures, sexual harassment guidelines and being respectful of colleagues regardless of their background, sexual orientation
or nationality.

While many companies operate their internship programs only during the summer months, Los Angeles-based cannabis testing lab CannaSafe’s program is open to students year-round. Unlike companies that serve the cannabis industry but don’t actually handle marijuana, CannaSafe requires interns to be 21 years old.

CannaSafe hires interns for virtually any position at the company, from lab assistants and technicians to drivers and customer support representatives. CannaSafe finds its interns through friends, family, social media and other business owners who know young people interested in a career in cannabis. CannaSafe pays its interns the standard rate it pays everyone for the position they’re working in.

“If someone was working as a lab assistant (intern), their salary would be between $15 and $18 an hour, just like our employees,” CannaSafe Director of Operations Antonio Frazier said. “This is because we only take qualified interns. Our interns are people who would normally be eligible for full-time hire but need to complete courses or aren’t available full time yet.”

The program typically lasts 90 days, which Frazier said is enough time to determine whether they will be a good fit for the company. CannaSafe’s orientation program covers industry background, science, ethics, protocols and how CannaSafe represents itself as a brand.

“Every employee represents the licensee, so it’s very important they understand what they can and can’t do to keep us compliant,” Frazier said. “There are a lot of things that can get you in trouble if you don’t operate the right way.”

CannaSafe’s internship program enables the company to attract talented scientists to an industry that people already established in their fields may shun.

“It’s hard to get scientists,” Frazier said. “It’s very hard for them to leave an industry that’s quote-unquote acceptable. We need to destigmatize the industry. It’s not going to blacklist you from working anywhere else.”

New York City-based Mattio Communications, a public relations firm focused solely on the cannabis industry, was set to hire its first interns this summer. The company found its candidates by reaching out to connections and searching the online sites LinkedIn and Indeed, as well as career centers at universities. After an initial phone interview with Talent Acquisition Leader Regina Rear-Connor, potential interns will meet with the Mattio team to learn more about the company, the industry and the clients it supports.

“We likely will hire three interns with the idea and hope that perhaps one of them, if they are graduating, might be interested in conversion to a full-time role,” Rear-Connor said.

After a day of onboarding, which includes an overview of Mattio’s clients, business operation and culture, interns will work on media projects, helping with pitches and learning the cannabis industry. They also will work on social media and build content for the events Mattio produces for its clients.

“It will be a great experience for them to see how far-reaching the industry is,” Rear-Connor said.