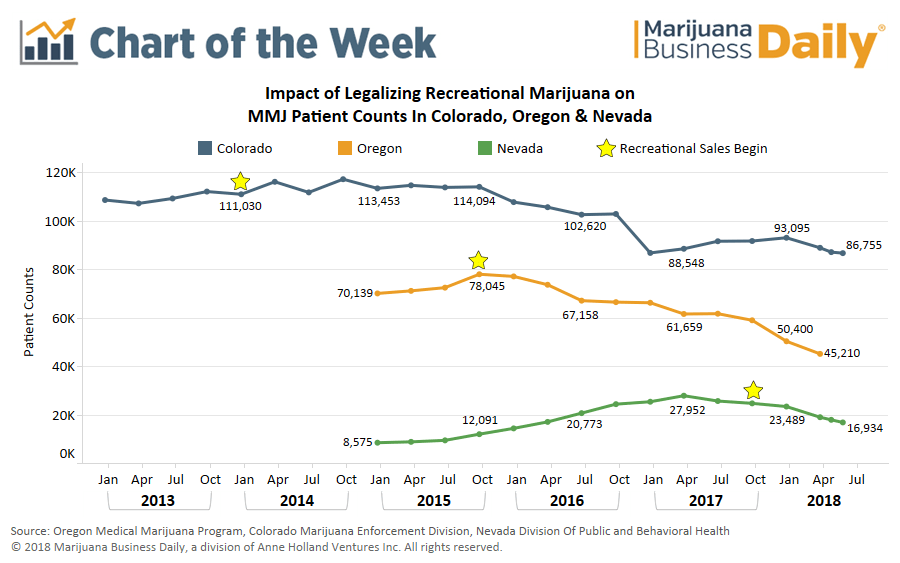 Medical marijuana programs in states that went on to legalize adult-use cannabis are suffering, raising questions about the future of MMJ in those markets.

The makeup of MMJ patients in those states also is changing.

Data from medical cannabis programs in Colorado, Oregon and Nevada – the only states with both an active recreational marijuana industry and a pre-existing MMJ patient database – shows patient counts steadily declining in the months and years after the launch of each state’s adult-use market.

Oregon’s MMJ program has been dealt the biggest blow, with patient counts falling 42% since early rec sales began in October 2015.

Nevada hasn’t fared much better, with patient counts down 32% since the October 2017 adult-use launch – an average decline of 5% per month. Last month, patient rolls dipped below the 17,000 mark for the first time since March 2016.

Colorado, by contrast, has fared better than Oregon and Nevada, with patient counts down 22% since the state’s rec market launched in January 2014. The smaller decline was likely driven by a combination of low-cost MMJ cards and significantly reduced tax requirements on medical purchases.

Annual sales for medical cannabis in Colorado actually increased each year from 2014 to 2016, falling for the first time in 2017. So far in 2018, however, both patient counts and MMJ sales are on pace to see multiyear lows.

In other words, it still makes sense for certain patients in states with both medical and adult-use markets to jump through the regulatory hurdles and pay the associated fees to renew their medical cards.

Still, many patients are opting for the more accessible retail market instead, as prices continue to fall and product selections expand.

While patient counts are shrinking in states with adult-use markets, the demographic composition of the patient base is also changing, which may provide opportunities for businesses that can adapt their offerings to serve a small, highly engaged customer base with unique needs.

Females constitute a higher portion of the patient base in both Colorado and Oregon (Nevada does not provide this information) after the launch of rec sales, now accounting for 38% of all MMJ patients in Colorado and 43% in Oregon. That represents a 5-percentage-point increase in Colorado compared to the launch of rec sales, and a 3-percentage-point uptick in Oregon.

Cannabis boom or bust: How US firms could be affected by Canada’s adult-use market