Sales of insurance-covered medical cannabis continued to increase during the first quarter of 2019 in Germany, the largest market outside North America.

In the first three months of the year, sales of reimbursed cannabis products totaled 24.5 million euros ($27.5 million), an increase of 7% from the fourth quarter of 2018, according to government data.

ADVERTISEMENT
The increase over the first quarter of 2018 was of 78%.

The association’s figures shed light on the health of one of the world’s largest medical cannabis markets.

In particular, the data shows that sales of reimbursed: 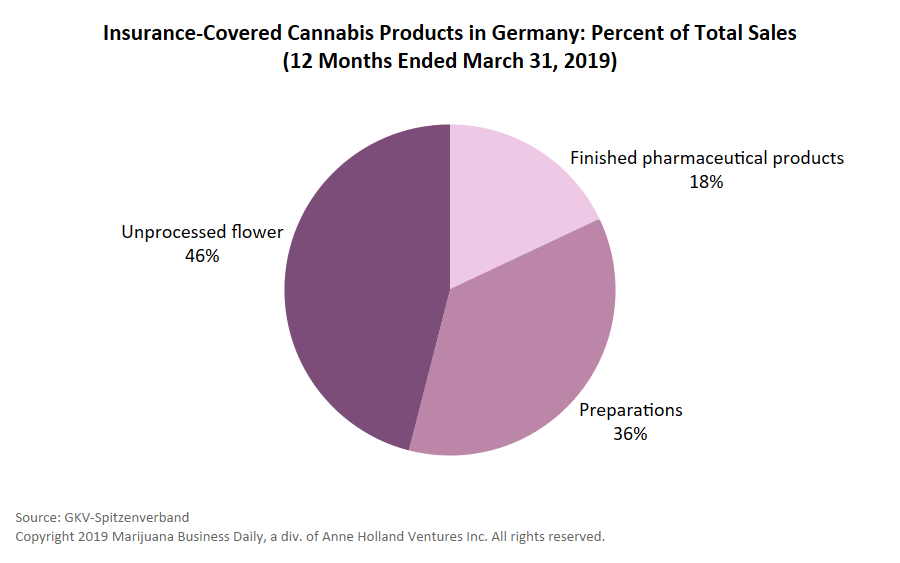 Data about the coverage of medical cannabis products in Germany is presented under three broad categories:

The sales data is based on the retail price at pharmacies, the only authorized points of sale to patients. For all products not included in the “finished pharmaceutical preparations,” pharmacies do a markup of up to about 100%.

Assuming an average retail price of 20 euros per gram of “unprocessed flower,” 579 kilograms (1,276 pounds) were covered by the statutory health insurance in the first quarter. This does not include flower that has been processed – when the doctor prescribes it grounded – which is included in the cannabis preparations category.

The estimated 579 kilograms figure also doesn’t include flower sold via private prescriptions. That’s because the GKV-Spitzenverband data includes only sales that were covered by statutory health insurance.

Germany imported 765 kilograms of flower for pharmacy dispensing in the first quarter. In all of 2018, about 3,000 kilograms were imported, more than double the 1,200 kilograms of 2017.