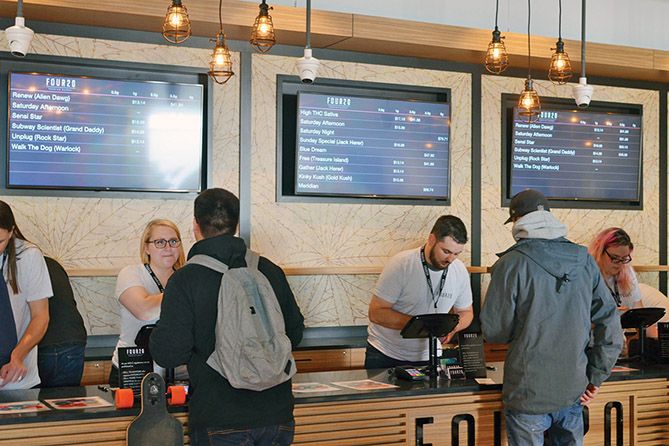 Canada’s adult-use cannabis market has expanded rapidly since the legalization of marijuana in October 2018. Monthly retail sales figures in May signaled an annual market worth around $1.6 billion (CA$2.2 billion)—or roughly the size of Colorado’s recreational and medical markets combined.

But since the population in Canada is more than six times larger than Colorado’s, the Canadian cannabis market has plenty of room left to grow as it matures. Already, today’s market looks a lot different than it did at the outset of legalization two years ago.

ADVERTISEMENT
Before internationally minded cannabis executives open their checkbooks to invest in Canada, it’s worth knowing the lay of the land. Here are key trends observed by Marijuana Business Magazine’s international team:

In the run-up to cannabis legalization in Canada, “funded capacity” was the buzzword on investors’ lips. The assumption was that producers who bankrolled the most future growing space would reap the biggest capital rewards.

Over the past year, some of that production capacity has come back to haunt several of Canada’s largest cannabis growers.

Alberta-based Aurora Cannabis, for starters, closed five production facilities across the country in June as part of a centralization move, not long after selling off an unwanted Ontario greenhouse for about half the listing price.

Canopy Growth shuttered two massive British Columbia greenhouses in March and abandoned work on another in Ontario, where its headquarters is located, citing “slower-than-anticipated” recreational market development. A Saskatchewan facility was axed in April.

Other cultivators including Hexo Corp. and The Green Organic Dutchman, both in Ontario, as well as British Columbia-based Tilray also have pulled back from unneeded facilities.

Altogether, those facility closures serve to illustrate the dangers of expanding too quickly in new markets, no matter how rosy the forecasts.

C-suite shake-ups at major Canadian producers have become commonplace in the past few years, as investors turned their focus from fundraising to profitability.

From Vic Neufeld, who stepped down as Ontario-based Aphria’s CEO in early 2019, to Bruce Linton, who was ousted from Canopy Growth that summer, to Terry Booth’s departure from Aurora in February 2020, a number of the executives who led the charge through legalization have since moved on.

With most large producers still struggling to prove they can turn a profit, it’s reasonable to expect more executives will be shown the door.

Staggering quarterly losses have stained the balance sheets of several major Canadian producers since legalization, although a handful have managed to turn a profit.

Some money-losing license holders have blamed lower-than-expected revenues partly on a painfully slow rollout of regulated cannabis stores in Canada’s largest provinces, including Ontario and Quebec. But undisciplined spending has played a role, too.

Aside from triggering facility closures and executive turnover, the continued red ink highlights the failure of most major publicly traded Canadian producers to deliver sustainable business plans in their home market.

If that trend doesn’t change soon, industry consolidation seems likely, with struggling companies either going out of business or getting scooped up by healthier rivals.

With their former leadership out, two of Canada’s largest producers have undertaken major corporate transformation in recent months.

Under Klein’s leadership, Canopy started closing cultivation facilities and pulling back from certain international markets to focus on Canada, the United States and Germany, where the company sees its best chances for near-term profit.

The success or failure of those corporate reform attempts will doubtless offer important lessons to the rest of the industry.

5. Layoffs proliferate at home and overseas

Corporate transformation plans at those two major producers have resulted in hundreds of layoffs in Canada and abroad in recent months. But job cutbacks haven’t been limited to Canopy and Aurora.

In the past year, layoffs also have taken place at CannTrust, The Green Organic Dutchman, Hexo, Organigram, Tilray and Zenabis.

Some of those job cuts have been related to the COVID-19 pandemic, while others reflect cultivation-facility closures and corporate restructurings at struggling producers.

At the very least, Canadian cannabis job losses translate into a large pool of workers available for companies in search of talent.

Canadian retail sales of legal cannabis have increased more or less sequentially in the months since legalization, from $31 million (CA$42 million) in the first month to nearly $139 million this past May. (See chart “Adult-Use Cannabis Sales by Month in Canada” above.)

That figure suggests a roughly $1.6 billion annual market for legal cannabis in Canada, despite lagging retail stores in key provinces.

The overall growth trend in sales continued during the COVID-19 pandemic, notwithstanding some regional variation related to temporary store closures in certain provinces, including Ontario.

The number of regulated adult-use cannabis stores in Canada passed 1,000 this summer.

Alberta, the fourth-largest market, leads the way with roughly 500 cannabis stores for a population of 4.4 million. Sales from that province comprised 25% of the national total in May.But Ontario, the largest province by population with 14.7 million people—nearly 40% of Canada’s population—still had fewer than 150 cannabis stores as of August.

Continued store growth in the months ahead likely will only improve legal marijuana’s market share in Canada.

Amid a dearth of outside funding in the past year, several cannabis companies have received creditor protection from Canadian courts—in effect, Canada’s form of bankruptcy protection.

Some of those creditor-protection orders come alongside debtor-in-possession loan deals from lenders who eventually acquire the distressed firms.

CannTrust in Vaughn, Ontario, is the biggest Canadian name to seek creditor protection in the past year after a 2019 scandal in which the license holder was sanctioned for growing plants in unlicensed areas.

After years of acquiring and building infrastructure abroad from Lesotho to Luxembourg, a number of Canadian producers have scaled back their international ambitions in favor of financial discipline. (See “Global Retreat”.)

10. Infused products on the rise

It took more than a year after Canada’s first wave of legalization for the government to finalize regulations for so-called “Cannabis 2.0” products, including edibles, infused beverages, topicals, vape cartridges and other concentrates.

Those products finally started trickling out to stores in December 2019, and consumers in most parts of Canada can now buy at least some marijuana-derived products from their local cannabis stores.

Vape cartridges are generally easy to find, but selection in other categories has been limited at times, with stores experiencing shortages of edibles and beverages.

For now, uneven availability for cannabis derivatives makes it harder to get a sense of which products, brands and price points are catching on with consumers.

More than 1.4 million pounds of unpackaged product was sitting in producers’ inventories as of April, plus about 85,000 kilograms (187,393 pounds) of packaged cannabis awaiting sale and millions of units of as-yet-unsold marijuana-derived products.

As if the existing massive stockpile of cannabis weren’t enough, a boom in outdoor cannabis crops is increasing regulated production.

Outdoor cultivation was permitted with recreational marijuana legalization in October 2018, but fewer than 20 licenses to cultivate marijuana outdoors had been granted as of summer 2019.

That figure had grown to 70 outdoor cannabis cultivation licenses in June.

Increasing outdoor production should help some growers achieve lower production costs and cheaper inputs for cannabis derivatives including infused products, which is important at a time when consumers are focused on affordability.

On the flip side: Any glut from outdoor harvests could contribute to stockpiles and falling prices.

As Canada’s adult-use market matures, major cannabis producers are increasingly competing against each other on price.

Retailers say they’ve observed growing consumer interest in discount brands—many priced around $3.75 (CA$5) per gram or less—giving them an opportunity to compete directly against the illicit market.

While those discount products might help producers unload some of their surplus, they come at a cost: As average prices have fallen, profit margins on dried cannabis have declined even as sales volumes have grown.

However, the vast majority of that exported cannabis (more than 94%) went to just one country, Germany, which is the largest medical cannabis market in Europe. Australia was the No. 2 destination, receiving about 450 pounds of Canadian flower in 2019.

That figure appears to have been a plateau: By March 2020, the number had dropped below 330,000. (See chart “Total Number of Registered Cannabis Patients in Canada” above.)

The decline in patient counts isn’t consistent across Canada, with some provinces including British Columbia, Ontario and Quebec seeing increases in the number of active medical cannabis registrations since legalization.

The biggest decline came in Alberta, which also has the highest per capita number of recreational stores of any Canadian province.

As more cannabis stores open across Canada, that will raise questions for producers reliant on medical cannabis revenue.

16. Micro companies on the rise

The number of micro licenses for cannabis cultivation and processing in Canada has grown steadily in the past year.

At the beginning of 2019, Health Canada had issued only one such license. By early August 2020, 78 entities held micro licenses.

For cultivators, a micro license allows indoor or outdoor growing space of up to 200 square meters. Micro-processing licenses similarly allow processing of a limited amount of cannabis with no limit on plants grown under a micro-cultivation license at the same site.

17. Outside funding dries up

There was a time when investors couldn’t get enough of Canadian cannabis stocks, resulting in soaring market capitalizations and consequent spending sprees by producers flush with cash.

Much of that investor interest dried up toward the end of 2019, as Canadian cannabis firms mostly failed to deliver on the hype.

In light of those capital market challenges, it has become increasingly rare for Canadian cannabis firms to go public.

In one case, a Canadian producer was actually delisted from stock exchanges: Scandal-struck CannTrust got booted from both the Toronto Stock Exchange and the New York Stock Exchange in the spring.

Aurora Cannabis consolidated its shares in April to avoid being removed from the New York Stock Exchange, and the NYSE warned Hexo in April that its shares could also be delisted for falling below $1.

The shifting market conditions are a reminder of an uncomfortable truth for the industry: Investors just aren’t as excited about cannabis as they used to be.

US House to take up cannabis descheduling bill week of Sept. 21