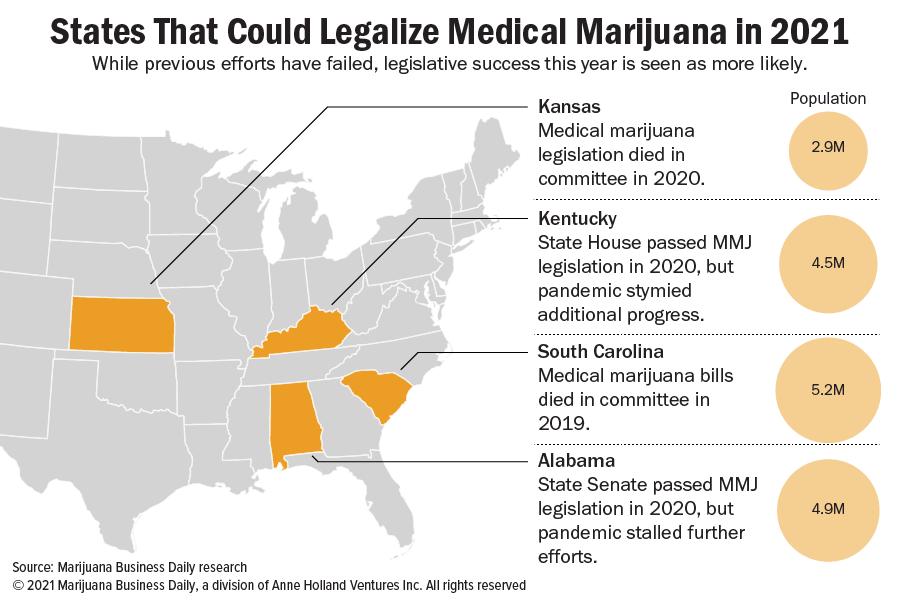 Four red states – Alabama, Kansas, Kentucky and South Carolina – could legalize medical marijuana through their legislatures this year, and, if successful, they could generate hundreds of millions of dollars in business opportunities across the supply chain over time.

Similarly, efforts to approve cannabis legalization are gathering momentum in Republican-leaning states after a clean sweep at the ballot box in November that included MMJ and adult-use victories in Montana and South Dakota.

To date, 38 states and Washington DC have legalized commercial MMJ programs. That has implications at the federal level.

In particular, legalization in conservative states increases the pressure on federal lawmakers from those jurisdictions to consider policy reforms such as marijuana banking legislation like the SAFE Banking Act, which the U.S. House of Representatives passed in 2019.

Those budget pressures are in part prompting recreational MJ legalization efforts from New York in the Mid-Atlantic to New Mexico in the Southwest.

Such fiscal pressures also could spur lawmakers to act in the four states expected to consider medical marijuana legislation this year.

“We are feeling quite good about those three states,” O’Keefe said.

She added that some policy advocates also are hopeful about Kansas, even though two medical marijuana bills introduced in that state’s Legislature last year died in committee.

“We know West Virginia came out of the blue,” O’Keefe said, in reference to lawmakers there passing a medical cannabis law in 2017. “It’s possible” in Kansas, too.

Pandemic stymies some efforts in 2020

Medical cannabis bills passed one chamber in both Alabama and Kentucky last year, and they might have crossed the finish line if it weren’t for the coronavirus pandemic shutting down most things, experts said.

Then came Mississippi, where voters surprised industry insiders when they approved a business-friendly MMJ initiative at the ballot box – despite the state Legislature’s attempt to defeat it with a competing restrictive measure.

Groups still are trying to overturn the will of the voters there, with two medical associations recently backing a constitutional challenge that is in front of the state Supreme Court.

Legalization in Mississippi makes it even more likely that neighboring Alabama will legalize MMJ this year, a legal expert said.

“I thought it had a better than even chance last year before the pandemic,” said Whitt Steineker, co-chair of Birmingham, Alabama-based Bradley law firm’s cannabis industry practice.

“I think that’s only been strengthened by the budget issues that everyone is facing, and maybe even more importantly for Alabama is Mississippi.”

In Kansas, lawmakers weren’t comfortable even talking about medical marijuana a couple of years ago, said Spencer Duncan, director of the Kansas Cannabis Industry Association.

“Now a majority of legislators are OK with the concept,” he said. “We’re moving mountains around here.”

The industry association is backing a recently introduced medical marijuana bill, and Duncan gives it a 50-50 shot at passing this year.

Still, Republicans have a super-majority in both chambers of the Kansas Legislature, he noted, so the bill “factors where we are” and, as a result, would call for a less liberal MMJ program than those in neighboring states such as Colorado and Oklahoma.

According to industry experts, marijuana businesses that launch in the Southeast and Midwest also are likely to benefit from:

Here is a more detailed look at the potential new MMJ markets up for grabs this year. Nebraska also is a possibility, although advocates are aiming for a ballot initiative in 2022 after the state Supreme Court shot down a 2020 MMJ initiative.

Status: The state Senate passed a medical cannabis bill last March by a 22-11 vote. But the coronavirus pandemic stymied efforts to bring the bill, SB 165, to a House vote.

Sen. Tim Melson, a Republican, has said he will introduce the same bill as last year. The legislative session runs from Feb. 2 to May 18.

Status: Two medical marijuana bills died in committee last year, but new MMJ legislation was introduced last week. The legislative session is underway and is scheduled to conclude May 14.

There is a lag with filing, and the bill had not yet been filed publicly by press time.

But the measure is generally modeled after New Mexico’s medical marijuana program, according to Duncan of the Kansas Cannabis Industry Association.

New Mexico’s MMJ program has a list of more than 25 qualifying patient conditions, including chronic pain and PTSD, and relatively high THC limits.

Duncan said the initial version of the Kansas bill doesn’t have licensing caps, but regulators would issue stand-alone licenses rather than vertical licenses.

“We want very clear designations (and licensing) between (producer) processor, distributor and seller,” Duncan said. “We believe each level needs its own licensing and set of rules to follow.”

He said that’s a model similar to how alcohol is regulated, so it “already has traction in the state.”

Status: Kentucky’s Republican-controlled House passed a medical marijuana bill by a margin of 65-30 last year, but the pandemic interfered with a potentially close vote in the Republican-controlled Senate. The House passage of HB 136 represented the first time a medical marijuana bill has passed either legislative chamber. The legislative session has started and runs until March 30.

Status: Two medical marijuana bills have been introduced, H3361 and S150, with the House version the less restrictive of the two. The legislative session convened Jan. 12 and is scheduled to adjourn May 13.