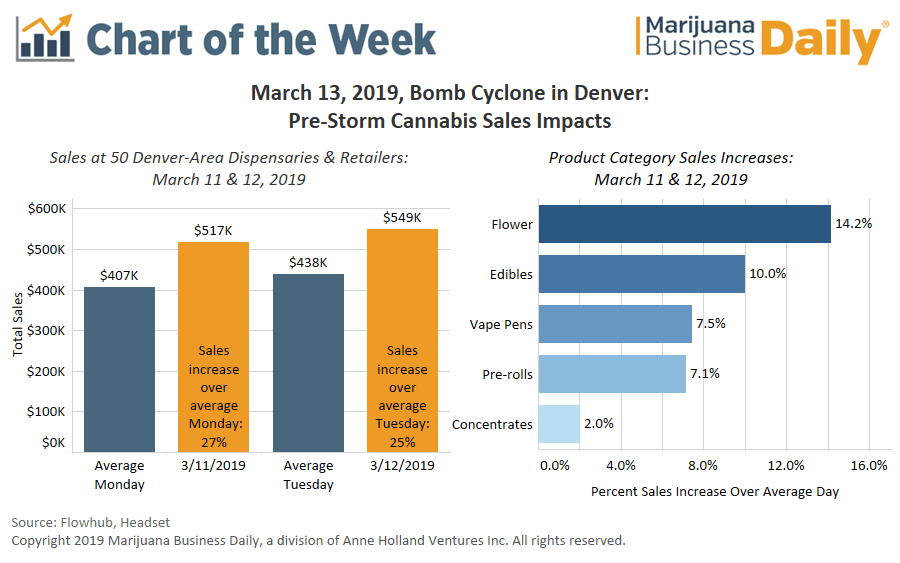 (This story has been updated to note that Flowhub and Headset analyzed the data for Marijuana Business Daily.)

Advance warning of the region’s “bomb cyclone” blizzard in March gave residents an opportunity to visit medical and adult-use retailers beforehand – leading to sales spikes of 10% to 27% in the days leading up to the snowstorm.

ADVERTISEMENT
The storm effectively shut down Denver on March 13, but advance warning gave Mile High City residents an opportunity to plan ahead in terms of child care, working from home, grocery shopping – and stocking up on marijuana.

Denver-based analytics firm Flowhub analyzed sales for 50 medical dispensaries and cannabis stores in the Denver area on March 11-12 before the storm.

Flowhub and Headset analyzed the data on behalf of Marijuana Business Daily.

At Colorado Harvest Company, which has three retail cannabis locations in the Denver area, owner Tim Cullen capitalized on the prestorm buying surge by offering a “Bomb Cyclone” discount – $16 for an eighth of an ounce of recreational cannabis flower.

“It wasn’t mind-blowing,” he added. “But it was definitely a Friday rush on a Tuesday.”

The one downside: Cullen had to close his stores on the day of the storm to ensure his staff was safe, so total numbers for the week averaged out.

And if you can’t sell all the extra inventory you stockpiled ahead of the storm, discount them afterward and promote your excess inventory.

“You move the product,” Heise said. “You increase your marketing and add specials and promotions in order to do it.”