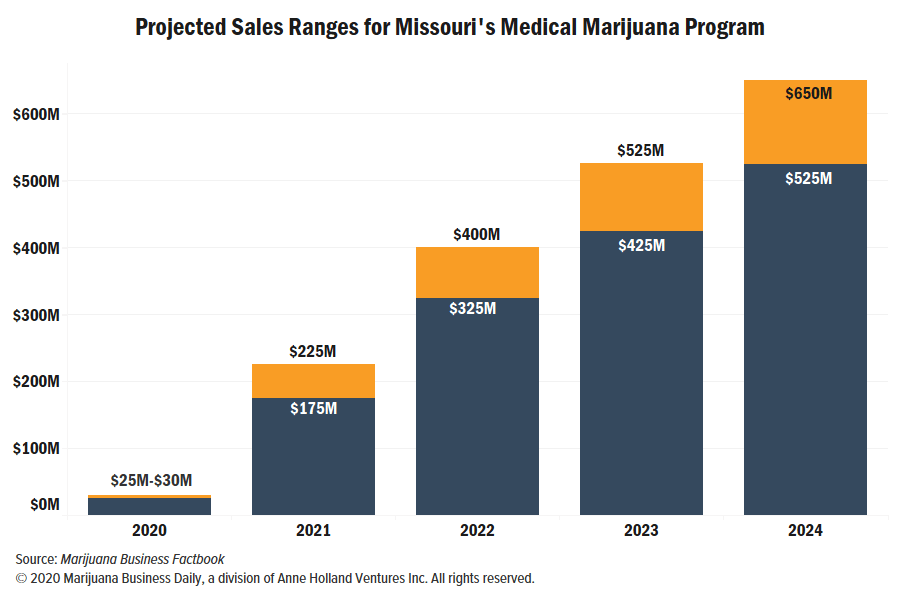 Missouri’s medical cannabis market launched over the weekend, with a pair of retail outlets outside St. Louis seeing long patient lines in a state where MMJ sales could hit an estimated $650 million a year by 2024.

The limited market launch is occurring two years after Missouri voters approved medical marijuana – but not without controversy.

ADVERTISEMENT
The license scoring sparked hundreds of appeals from unsuccessful applicants and a legislative investigation of the process.

N’Bliss kicked off market sales Saturday with the opening of two dispensaries in St. Louis County, as Missouri became the 34th state in the U.S. to launch a full-fledged MMJ program. (Marijuana Business Daily characterizes MMJ programs differently than some groups).

The first dispensary in the Kansas City area, Fresh.Green, was scheduled to open at noon CT Monday, according to the Missouri Medical Cannabis Trade Association (MoCann Trade).

Only a few Missouri cultivators have harvested so far, so it likely will take several months for product supply to catch up to demand, industry officials said.

Product prices initially are expected to be expensive.

The St. Louis Post-Dispatch reported that an eighth of an ounce each of two medical marijuana strains, rolling papers and a lighter cost $141 at N’Bliss, including $16 in tax.

Some license sale-and-acquisition negotiations are occurring, according to industry insiders, as companies try to complete vertical operations from stand-alone licenses or try to cash out.

Patient demand appears strong. Roughly 65,000 patients have been approved, and more than 10,000 patient applications are being processed, according to MoCann Trade.

Transporter licenses are an open process, and as of last week, 22 such permits had been issued, according to state records.

Aside from the license scoring brouhaha, the coronavirus pandemic also delayed the launch in Missouri by several months.

Kevin Riggs, president of Missouri-based BeLeaf Medical, which won three cultivation, two processing and five dispensary licenses, gave the state high marks, though, for “diligently” trying to learn from failures and successes in other states.

He told Marijuana Business Daily last week that one of BeLeaf’s dispensaries is ready to open in the St. Louis area and that the first product batch had been tested, with several more in process.

BeLeaf was the first company allowed to begin cultivation.

But Riggs said he’s being cautious about an opening date for his dispensaries.

“We’re hopeful to open sometime in October,” Riggs said. “But we’d like to make sure we have enough product to make it worth everyone’s while.

“We don’t want to open one or two days, then have to close.”

Riggs said product initially will be “flower-heavy,” and he doesn’t expect a range of manufactured products until January.

“If we could get something out for Christmas, it would be awesome,” he said.

Lisa Cox, spokeswoman for the Missouri Department of Health and Senior Services, said last week that the state wasn’t doing an “official launch.”

Instead, she said, the state left it up to individual facilities to decide when to open based on product availability in their supply chain.

As of last week, the state had approved 21 facilities to begin operations. The breakdown by category wasn’t immediately available.

Cox wrote in an email to MJBizDaily that she expects “the majority” of the 192 dispensaries to open by year-end.

Some are waiting. Colorado-based Terrapin Care Station, for example, said in a recent news release that it would be opening its two Missouri MMJ dispensaries in 2021.

Massachusetts-based Curaleaf, which has become the country’s largest marijuana company by revenue after acquiring Illinois-based Grassroots Cannabis, appeared to acquire control of a processing license and five dispensary licenses in Missouri through the Grassroots deal.

Curaleaf noted the processing operation in a recent regulatory filing but said that, while it “might have” rights to dispensary licenses in Missouri, it doesn’t intend to “operationalize” the dispensaries.

It’s unclear what might happen with all the appeals from unsuccessful license applicants in Missouri.

In other markets, some companies have won marijuana business licenses through legal challenges.

Some Missouri lawmakers have pushed for additional licensing because of the problems.