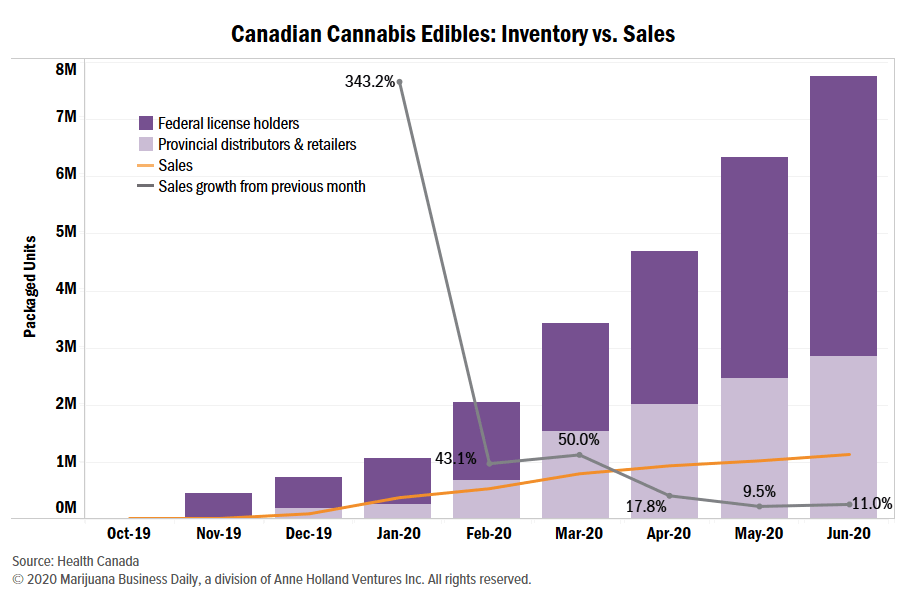 The discrepancy between sales of cannabis edibles and inventory in Canada is growing, according to the most recent data from the federal health regulator.

ADVERTISEMENT
That compares with sales of 1.1 million units in medical and non-medical channels, per the Health Canada data.

The discrepancy – 6.7 million units – is an increase from the previous month’s 5.3 million packaged units and comes as sales growth is slowing for the category.

Another 3 million units of edibles were placed in the “final packaging” stage that month.

Some of that inventory will have found a home in the approximately 200 adult-use cannabis stores that were opened between June and October.

Most of the cannabis edibles was sold in the adult-use market (1.09 million units), and a small amount was sold to medical patients (22,630 units).

Roughly 720,425 kilograms (720 metric tons) of unpackaged dried cannabis was held in stock in June by cultivators and processors.

Packaged inventory of dried cannabis held in stock by cultivators, processors, distributors and retailers was only 82,582 kilograms in the same month.

Health Canada has not disclosed sales of dried cannabis in kilograms since last year.

Sales of cannabis extracts were 1.2 million in June versus inventory of almost 10 million units.