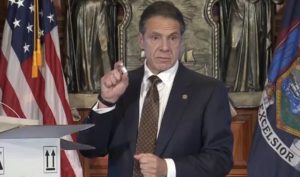 As New York's governor, Andrew Cuomo signed a recreational marijuana program into law in March 2021, but movement on actually launching sales has since stalled. (Photo courtesy of Felton Davis via Flickr)

New York Gov. Andrew Cuomo’s announcement that he would resign from office amid sexual-harassment and assault allegations added fuel to the political crisis rocking the state and could further slow the rollout of the recreational marijuana program he signed into law.

Any delays could hurt smaller operators in particular, including social equity applicants, who plan to apply for licenses to operate cultivation facilities, shops and other businesses in a market that is expected to exceed $2 billion in annual sales in a few years time.

The turmoil engulfing the governor also could hold up appointments to the state’s new Cannabis Control Board.

“We’re at a critical moment here where we are waiting for the governor to appoint a chair for the cannabis board. Any kind of political disruption certainly can delay (the program), especially at this point in the process,” said Rob DiPisa, co-chair of the New Jersey-based Cole Schotz cannabis practice.

The New York market had been expected to launch as soon as the spring of 2022. But that start could slip to 2023, according to experts, a year or so behind rival New Jersey.

New York has an ambitious goal of issuing 50% of all adult-use business licenses to social and economic equity applicants.

However, such applicants already face daunting challenges in lining up financing and will need to be particularly cautious in spending money to secure real estate since the timing of a market launch is highly uncertain, industry officials said.

“If you want to look at some choice real estate now for a grow or processing facility you could find yourself in the position of having to buy that lease now and wait two years before you can get your business up and running, and that could be ruinous,” said Steve Hawkins, CEO of the U.S. Cannabis Council and executive director of the Marijuana Policy Project.

There is a potential silver lining, however.

Cuomo, who resisted but finally stepped down in the wake of a state attorney general’s report that concluded he sexually harassed 11 women, is being replaced by Lt. Gov. Kathy Hochul, who has said some encouraging words about recreational marijuana legalization.

“She has been quoted that there’s a need for the money, it’s long overdue, and that the system has been unjust for so long,” DiPisa said.

“She’s even referred to other states that have legalized as enlightened. It’s reassuring to me to know that her viewpoints are in line with the direction we’re headed.”

But it’s uncertain how quickly she’ll act given the political crisis that she’s about to step into.

New York-based Viridian Capital Advisors sees Hochul as being more likely to “steady the timeline,” noting in a Wednesday report that Cuomo was a “reluctant supporter” of an adult-use marijuana market.

But any fast-tracking by the state is likely to benefit existing medical cannabis operators, Viridian said, of which nine of 10 are multistate operators.

Michelle Bodian, senior associate attorney for Denver-based cannabis law firm Vicente Sederberg, noted that establishing the Cannabis Control Board (CCB) is the “crucial first step to setting up the market, so the big question is when those commissioners will be appointed.”

Bodian said the governor must nominate an executive director with the “advice and consent” of the state Senate.

Hochul will have two additional appointments to make to the board, while the state Legislature is charged with the remaining appointments.

“If appointments to the CCB are not made in a special (legislative) session or at the top of the agenda in January at the start of the next session, the market in New York will likely be further delayed,” Bodian wrote in an email to MJBizDaily.

Cuomo, who signed recreational marijuana legislation into law in late March, already was struggling to move forward with the cannabis board appointments.

“My perspective is New York (already) is definitely off to a slow start compared to New Jersey and Connecticut,” Hawkins said.

“Advocates had been pushing the Cuomo administration to do more but to little avail.”

Hawkins and DiPisa both predicted that any delays would be most acutely felt by small businesses and individuals, including those affected by the war on drugs.

Financing has long been more difficult for minority entrepreneurs, and “if history is any guide, it’s going to continue to be a problem,” Hawkins said.

“I’m encouraged that Chris Webber is trying to build a $100 million pot, but finding the operating capital and investment is still difficult,” he said, referring to the former NBA star who earlier this year unveiled plans to participate in the marijuana industry.

In February, New York fund manager JW Asset Management announced it was teaming up with Webber to launch a $100 million private equity fund that will invest in marijuana entrepreneurs from underrepresented communities.

DiPisa said one of the hardest parts of his job is helping a client determine “when is the time to pull the trigger” on securing real estate.

“Each applicant is different,” DiPisa noted, “but the last thing you want is for a small operator to overextend themselves.”

Potential applicants need to pursue their real estate options, he said, but not necessarily sign a financial agreement.

“The gamble is that you lose the property, DiPisa said, “and have to push the reset button.”

But he noted that one “has to be accustomed to rolling with the punches” in a cannabis industry that often has unpredictable timing in regard to the application process and awards.

One of the positive aspects of New York’s adult-use marijuana law is that while municipalities can ban retail establishments, they can’t prohibit growing and processing facilities so there’s flexibility in deciding where to set those up, DiPisa said.

Not that it’s smooth sailing in New Jersey.

The state approved adult-use marijuana at the ballot box in November 2020 but now is facing its own issues getting a cannabis regulatory agency up and running.

Yet, New Jersey most certainly will launch its recreational marijuana program in 2022 if not late this year with existing medical cannabis operators, while New York’s market start potentially could be delayed until 2023.